Following the launch of the srt.phone, domestic smartphone manufacturer Smartron has announced the t.phone P, a budget-friendly Android device with a massive battery. The Smartron t.phone P will go on sale exclusively through Flipkart on the 17th of January. Competing with the likes of the Xiaomi Redmi Y1 and the Redmi Y1 Lite, the t.phone P checks off everything on paper, but is it worth the Rs. 7,999 price tag? Read on to find out.

Before we get into the nitty-gritty of the device, let’s get the specifications out of the way. For a budget device, the t.phone P comes with solid hardware, which you can check out below:

The Smartron t.phone P comes in a fairly neat package with the company’s white and orange color scheme. Our review unit came with all the basic things you’d receive with a smartphone in this price range, including:

While the contents of the box are more than enough to get you started with the t.phone P, a fast charger would have been a great addition, considering the device’s massive 5,000mAh battery which will take ages to charge with the charger provided.

The t.phone P, which is manufactured by China-based ZTE, features a design language which is reminiscent of the Redmi Y1 from Xiaomi. The device has a solid feel in the hand and it feels a bit on a heavier side, thanks to the large battery. However, the company claims that it’s the lightest smartphone with a 5,000mAh battery in the market. 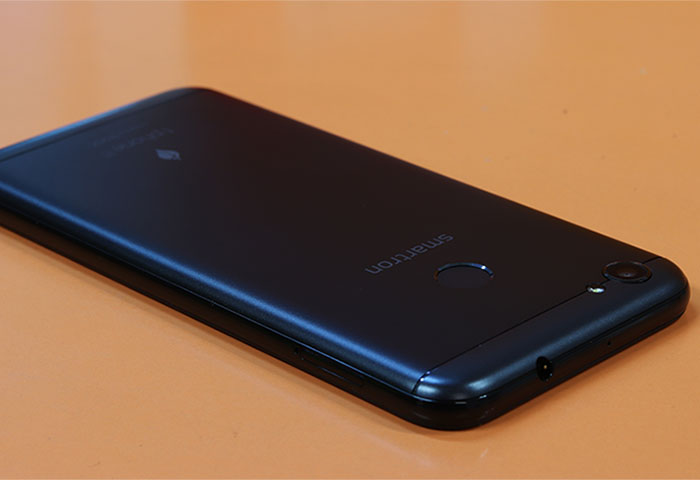 For its price, the t.phone P feels quite premium due to its metal body, but the plastic edge all around the device is definitely a let down. At the front, the device houses a 5.2-inch 720p IPS panel with the selfie camera and back-lit touch capacitive buttons on the top and bottom respectively. On the left resides the dual-SIM slot with a hybrid microSD slot for expansion. Whereas on the right resides the volume rocker and the power button. The power button has a textured finish which, in my opinion, is a thoughtful addition.

The smartphone retains the headphone jack which can be found at the top of the device next to the secondary noise cancellation microphone. The bottom edge houses the micro-USB port for charging and data transfer, sandwiched between two speaker grills. However, the device only includes a single bottom firing speaker which is frankly quite weak. 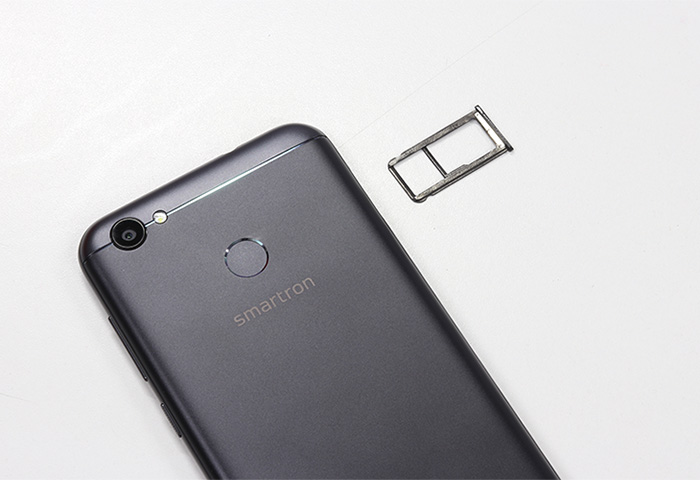 In keeping with the current trend in the budget smartphone space, the t.phone P features a 5.2-inch IPS LCD with a display resolution of 1280*720. Since the display is a touch smaller than the 5.5-inch standard found in most other devices in this price range, the device has a better pixel density which results in a sharper display quality and the color reproduction is saturated and punchy. 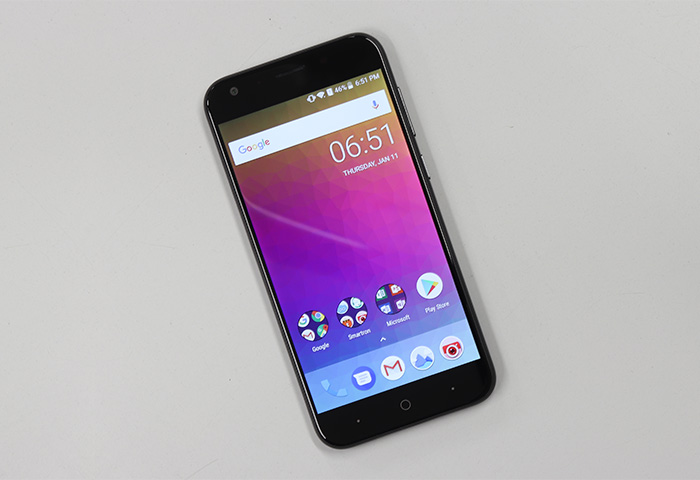 Additionally, the display has good viewing angles and it gets quite bright so outdoor visibility is well above par. All in all, the display is good for a smartphone in the price range and an average user won’t be able to notice any pixelation from a normal viewing distance.

Something I personally liked about the t.phone P is its near stock interface. Although the company has included a skinned version of Android Nougat, called tronX, they’ve not gone overboard with the customization. The default launcher has a Pixel-esque look to it with the persistent search bar and the swipe up to launch app drawer gesture. Coming from a OnePlus 5, the UI does feel a little sluggish at first, but since both of the devices have a huge price gap between them, the performance of the t.phone P is rather acceptable. 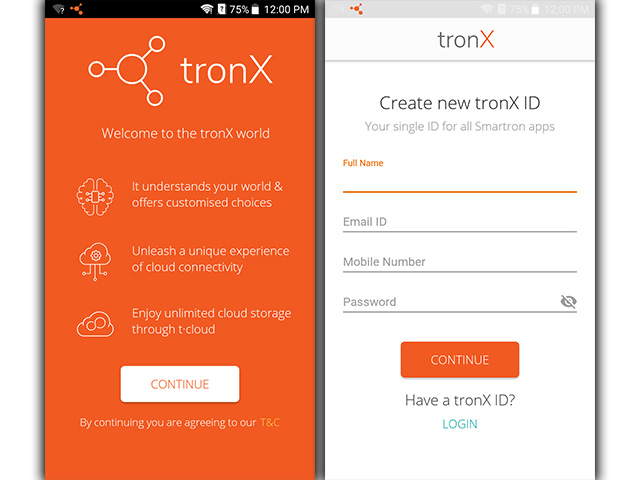 As is customary with other Indian smartphone manufacturers, the t.phone P does include some bloatware. It comes with three standalone apps from the company- t.cloud, t.care, and t.store- which might come in handy as they offer unlimited cloud storage, real-time customer support and an e-commerce portal for compatible accessories and other Smartron products. Additionally, the smartphone also includes apps from the Microsoft Office suite, including Excel, PowerPoint, Word, OneNote and Skype, which might also be useful for the end user.

In terms of bloatware, the t.phone P doesn’t bring anything that might be intrusive, however, the aforementioned apps cannot be uninstalled which might be annoying for some users. 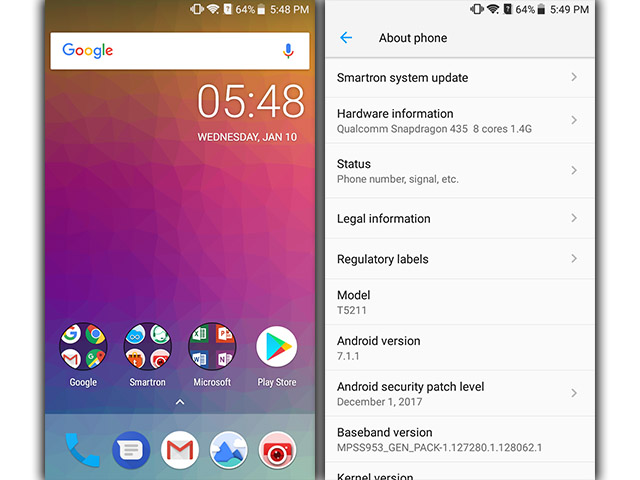 Powered by the Snapdragon 435 Octa Core chipset, the t.phone P performs exactly like you’d expect from a budget handset. While the benchmark scores are comparable to the Redmi Y1, which features the same processor, real world performance is a tad bit better since the internals are not bogged down by a heavily customized UI. With 3GB RAM in tow the device zips through most of the regular tasks with a frame drop here and a stutter there. In my opinion, the performance isn’t shabby and is well worth the asking price. 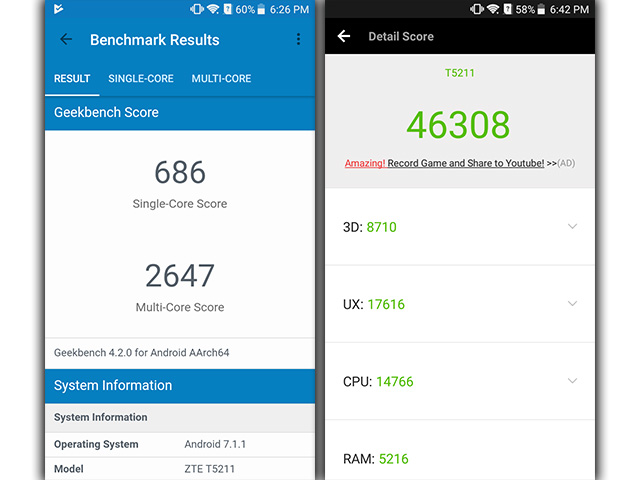 The touch response in games is quite great and multitasking is also not much of a problem as the device can comfortably hold around 5 apps, including heavy games, in memory at any given time. As far as benchmark scores are concerned, the attached images speak for themselves. The t.phone P scores a 46,308 in Geekbench 4 and 686/2647 single-core/multi-core score on AnTuTu, respectively. The scores might not mean much to the average consumer, but I’ve added them for comparative purposes.

Moving on to the 13MP shooter on the t.phone P, there’s not much that you should expect from the device on this front. The photos captured by the rear camera don’t justify the megapixel count and they have quite a bit of noise.

With moving objects, the camera performs abysmally and even though the app features a “manual mode”, it doesn’t help improve the image quality in any way. 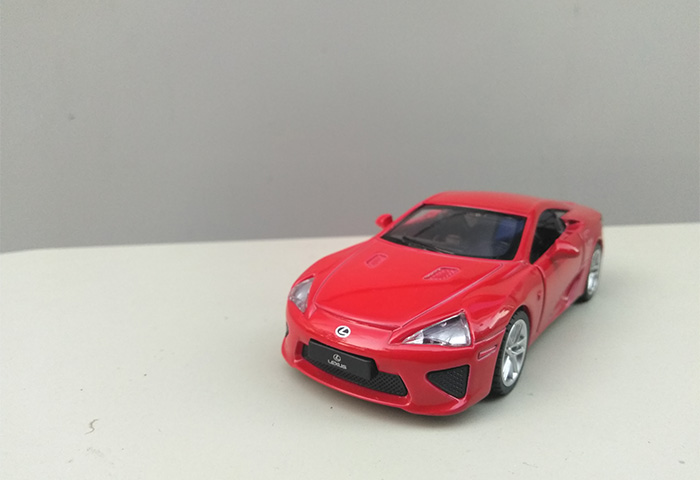 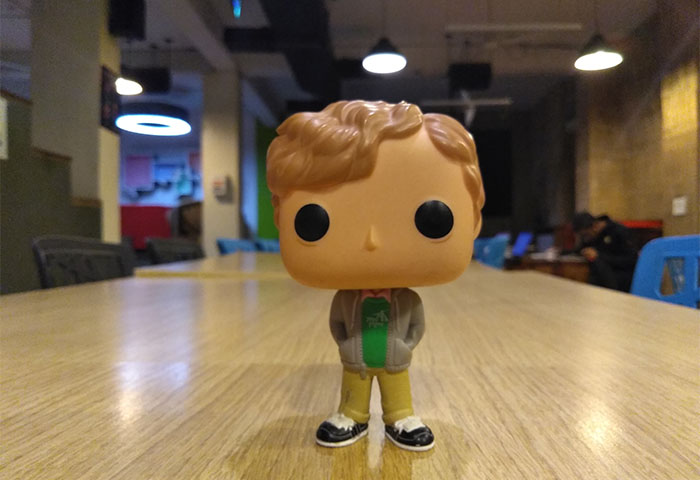 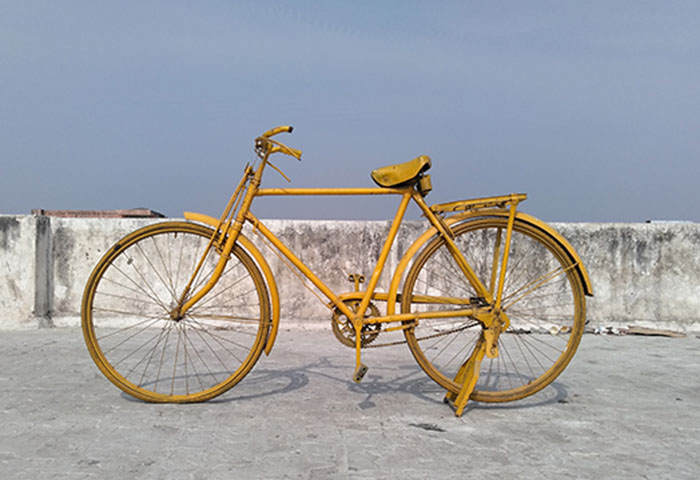 In the words of our resident photography expert Manmeet, the manual mode only lets you adjust the ISO and white balance, but you can’t change the shutter speed. Due to this, the manual mode is just sort of an added gimmick, with no positive impact on the image quality. 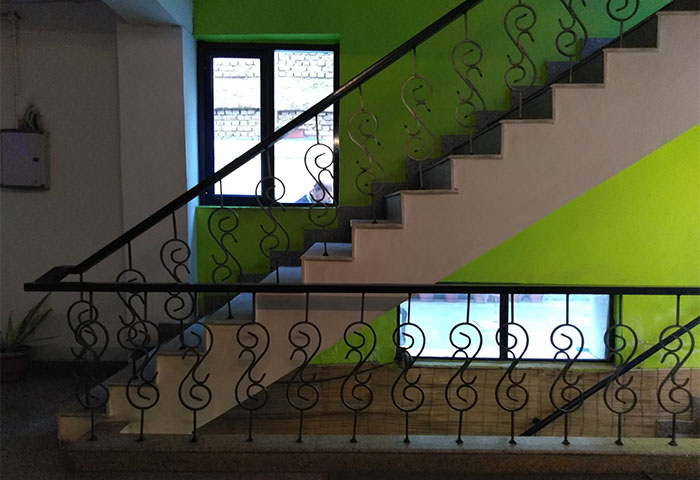 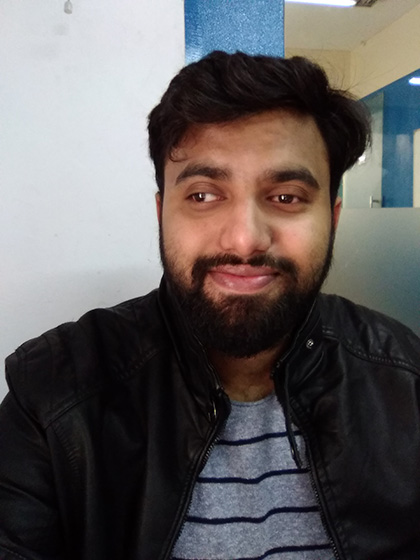 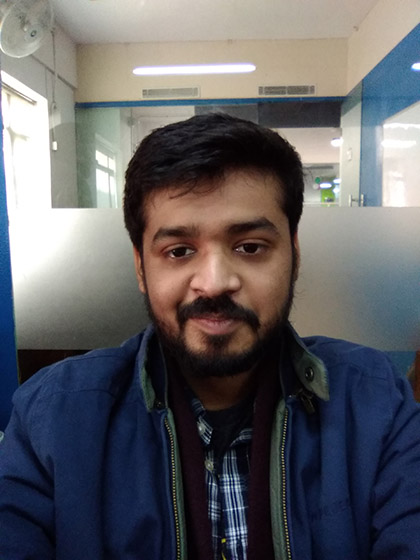 However, considering the device’s target market, the camera will get you by on a day to day use case, as long as you don’t expect professional quality images from it. The 5MP front camera produces rather soft images, but once again, the images completely justify the smartphone’s price. Do note that if you’re expecting stellar images from a smartphone in this price range, then the t.phone P is not for you.

The 5,000mAh battery on t.phone P is it’s USP and the device won’t let you down when it comes to battery life. Coupled with the power efficient Snapdragon 435 processor and the 720p display, the t.phone P easily lasts over two days with normal day to day use. Even with heavy use, which includes multiple hours of gaming, watching videos, and browsing, the device can easily power through a day with enough juice left to get you through most of the second day. 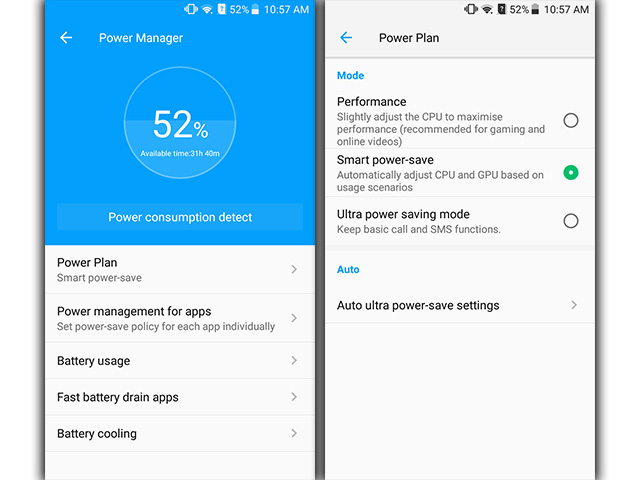 Smartron has included a neat battery saving feature in the phone which lets you choose between three power plans, including a performance mode, a smart power-save mode and an ultra power saving mode. The Performance mode, as you’d expect, adjusts the CPU to maximize the device’s performance and should be your go to setting while playing games or watching videos. The Smart power-save mode, on the other hand automatically adjusts CPU usage to maximize battery life. Lastly, the Ultra power saving mode reduces the device to a feature phone, limiting its functionality to just calls and SMS in order to keep the device up and running when there’s no power outlet around.

In the saturated budget smartphone space, the t.phone P competes with a number of devices from different manufacturers. However, it’s closest competition is the Redmi Y1 (Rs 8,999) and Redmi Y1 Lite (Rs 6,999) from Xiaomi. If you’re looking for a device with a premium build quality and amazing battery life, the t.phone P easily trumps its competition with its metal finish and 5,000mAh battery. But, in case you’re looking for a decent camera in this price range, the Redmi Y1 devices outperform the t.phone P by far. 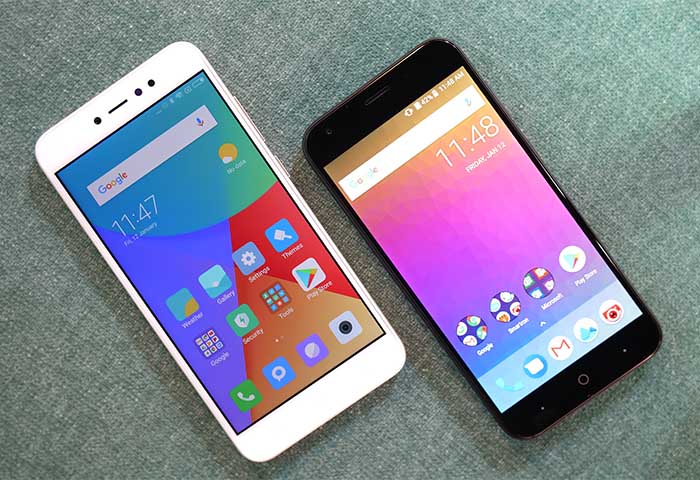 When it comes to the user interface, the t.phone P, in my opinion, is better than the competition. The near stock Android experience on the device is significantly better than MIUI on the Y1 duo. The heavily customized UI on the Y1 devices also bogs down the system overall, so the t.phone P has a slight edge when it comes to the general performance and multi-tasking as well. 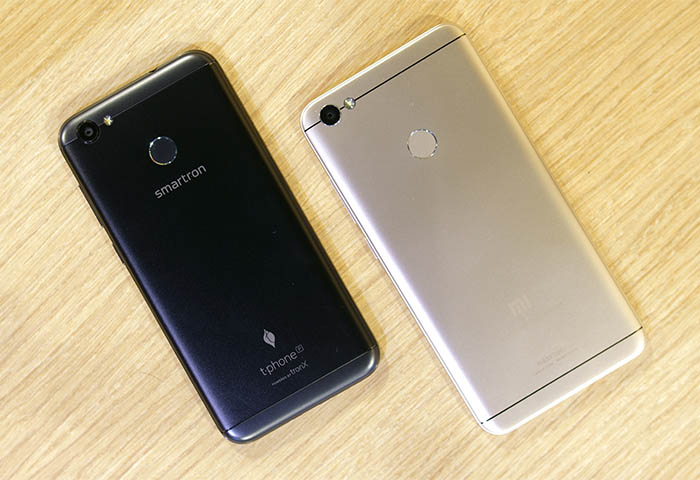 That brings us to the conclusion of our review. The t.phone P is a decent budget smartphone from Smartron and won’t disappoint buyers if they’re looking for solid performance with a great battery. However, if you’re looking for a budget device with a good camera, then the t.phone P is not the smartphone for you. The device’s main selling point, it’s battery, exceeds expectations and will not let you down when you need it the most. 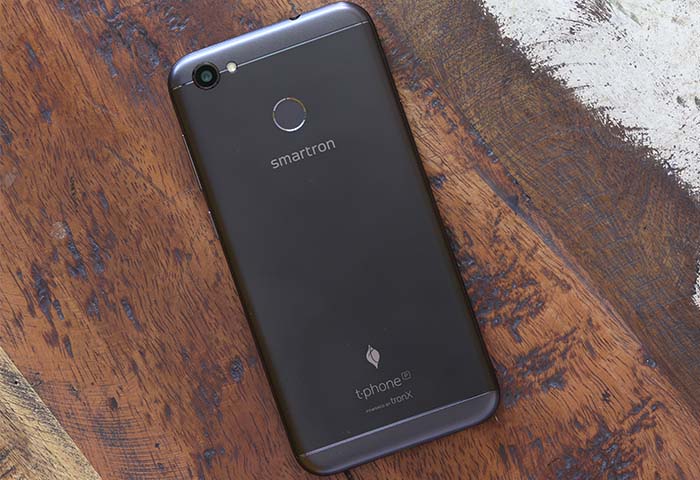 The Smartron t.phone P is a decent smartphone for its asking price and you won’t regret going for it as long as you’re not expecting too much from the camera. So, what do you think of the Smartron t.phone P? Would you prefer its massive battery and premium build quality over the Redmi Y1’s better camera performance? Do let us know in the comments down below.