Skip to content
Home Cool Gadgets Seagate One Touch vs Samsung T5: Which Portable SSD Should You Buy?

If you’re in the market to buy a great portable SSD for your storage needs, chances are you’ve spent hours scouring all the options available on the market. If there’s one good thing about external storage devices that has happened over the last couple of years, it’s the fact that SSDs are becoming more affordable, and while there are a lot of great external SSDs you can check out, Samsung’s T5 Portable SSD, and the Seagate One Touch Portable SSD are two of the more popular choices out there. So which one should you buy? Well, I have tested both the SSDs extensively, and here are all the differences, the pros and cons that you should know before making a final choice.

The most important aspect of choosing an external SSD will most likely be the performance offered by them. There are multiple things to consider here, including what it is you want to use the SSD for, and the connection technology the SSD is using. That’s one of the areas where these two SSDs differ by a lot.

The Samsung T5 SSD comes with a USB-C port, and supports USB Type-C 3.2 Gen 2 transfers, which means you can get much higher speeds than regular USB 3.0 connections. The Seagate OneTouch SSD on the other hand, uses USB 3.0 to connect with a computer or laptop. That’s a little sad, because this port here on the OneTouch SSD is that weird USB Micro-B cable you’d find on external hard disks.

Obviously, these theoretical speeds don’t mean much in the real world, so I tested both of these SSDs for their read/write speeds.

That’s a fairly big difference in speeds on both the SSDs, and it’s all thanks to the fact that Samsung is using USB Type-C 3.1 Gen 2 in the T5, while Seagate, for some reason, is using USB 3.0 instead.

In general, SSDs are more reliable than spinning disks, that’s just a fact. However, even with solid state storage, there are chances that something might go wrong, and in those cases, having a solid warranty would be helpful. Fortunately, both Samsung and Seagate offer a limited 3 year warranty on their respective SSDs, which means that if your SSD fails on you for some reason, you can get support from the companies.

Normally, this section wouldn’t matter, but if you’re dropping somewhere around ₹13,000 to ₹15,000 on an external SSD, it better look good and last long enough, right? Although design is a subjective thing to talk about, personally, I like the fabric-covered design of the Seagate OneTouch SSD over that of the metal body of the Samsung T5.

However, the metal build does make the Samsung T5 SSD a stronger SSD as well, so it will definitely be able to take more drops and bumps than the Seagate OneTouch SSD. Basically, if you find yourself dropping your products often, the Samsung T5 is probably a better bet. 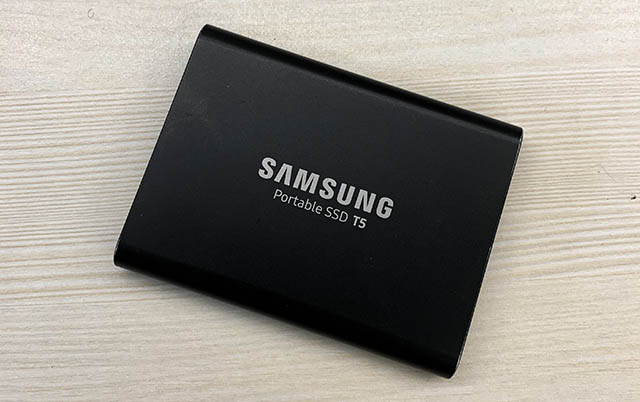 Seagate does have one thing going for it though, the fact that it’s priced at ₹12,999 for the 1TB variant as compared to the ₹14,999 price tag on the 1TB variant of the Samsung T5 SSD.

However, the fact remains that in exchange for saving ₹2,000 on your SSD, you’re giving up on a lot of speed, the build quality, and USB-C. Personally, I’d take the Samsung T5 SSD over the Seagate OneTouch SSD.

That said, there are other options as well that you can check out. There’s the 1TB Seagate Fast SSD (₹14,999) that comes with USB-C connectivity that you can go with if you prefer Seagate for storage solutions. There’s also SanDisk’s 1TB SSD with USB-C (₹13,465). There’s also the Lexar Professional SL100 Pro 1TB SSD (₹9,999) with incredibly fast read/write speeds of up to 950MB/s which is a solid deal.

Clearly, there are a lot of choices, but if it’s the Samsung T5 vs the Seagate OneTouch SSD that you’re confused between, I’d suggest you go with the Samsung T5 SSD because it brings a better build, USB-C connectivity, and faster read/write speeds as compared to the Seagate OneTouch SSD. So, which external SSD are you planning on buying? Let us know in the comments down below.

This External SSD Has 16TB of Storage Space and Costs Nearly $3,000

5 Best External SSDs You Can Buy