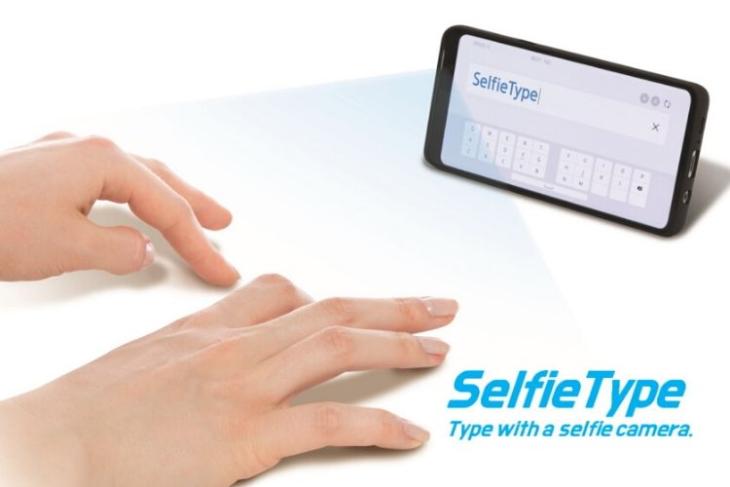 One of the biggest electronics conference on the planet, CES 2020, is only a week away now. Technology giants have started teasing what they will unveil at the conference and Samsung has a lot of surprises up its sleeve.

I know, you are eager to learn more about Neon, the artificial human as the company is calling it. But, I’m more excited to check out one of the projects from Samsung’s C-Lab incubation program (which kicked-off back in 2012 to allow the company’s employees to openly work on their own ideas as side-projects) at CES 2020. It is called SelfieType and can be described as a “virtual keyboard technology” for smartphones, tablets, as well as laptops.

Samsung hasn’t revealed a lot of details about SelfieType but the official blog post states that it’s a virtual keyboard that you can type on via the selfie camera on your devices. It doesn’t require you to attach any additional hardware – as is usually the case with holographic keyboards. Samsung is employing a “proprietary SelfieType AI engine” which reads your finger movements via the selfie camera up-front to instantly convert the input into QWERTY content.

SelfieType is a catchy name for the feature and we can’t wait to check it out while we are on the ground at the CES show floor in Las Vegas. Since it’s a C-Lab project, this new AI-enabled project will most likely be in its nascent stages. But, if it’s good enough then we can expect Samsung to one day bring SelfieType to its own smartphones as just another alternative to typing on glass slabs.

Besides SelfieType, Samsung will also showcase a slew of other C-Lab projects, including Hyler (a smart highlighter that converts analog text to digital content), Becon (scalp home-care service), SunnySide (window-shaped artificial lighting device), and finally Ultra V (a new type of sensor for recording UV rays data). Like I said earlier, we’ll be at CES 2020 covering all the cool stuff live, so stay tuned for some interesting stuff.