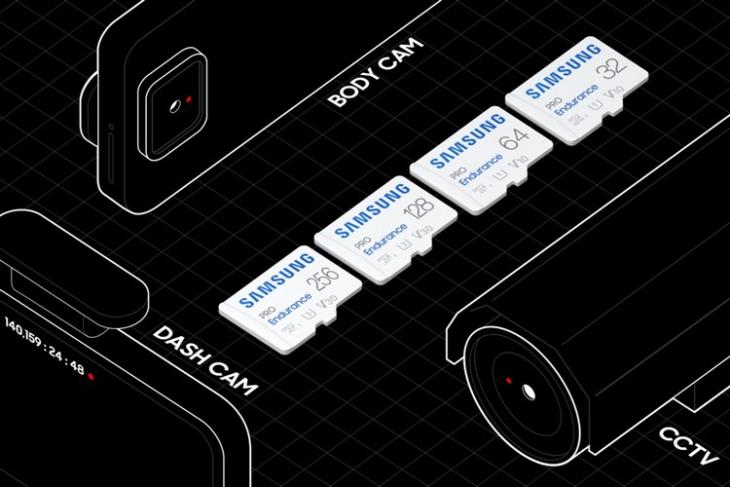 In addition to announcing the next-gen UFS 4.0 technology recently, Samsung has unveiled its new Pro Endurance MicroSD card for CCTV cameras, body cameras, doorbell cameras, dashboard cameras, and more. Samsung’s new Pro Endurance memory cards comes with up to 256GB of capacity and lets people use them for up to 16 years of continuous recording time. So, let’s take a look at the details right below.

Samsung, via an official press release, reveals that the new Pro Endurance memory card provides “improved endurance and outstanding performance for smooth and reliable continuous capture and playback.” It is available in four storage variants, ranging from 32GB to 256GB.

For starters, the highest capacity Pro Endurance memory card can record up to 16 years (around 140, 160 hours) of high-res footage, and lasts as long as 33 speed-focused memory cards, thanks to the use of the company’s enterprise-grade NAND flash memory technology. It can also deliver read speeds of up to 100Mbps and write speeds of up to 40Mbps, and it supports playback in Full HD and 4K resolutions.

Another important aspect of the new Pro Endurance memory card is that it has been designed to endure harsh environmental conditions as body cameras, CCTV cameras, and other surveillance cameras are often subject to harsh environments.

The company has implemented its “reinforced six-proof durability” to make the memory card stronger. It comes with dedicated protection against magnets, water, X-rays, and extreme temperatures. The Pro Endurance cards are also drop-proof and wearout-proof and come with up to 5 years of warranty.