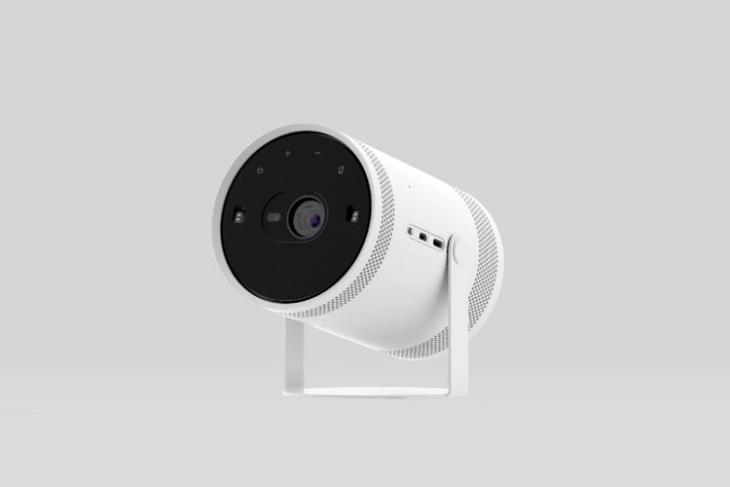 Samsung recently released a new portable projector during the CES 2022 tradeshow. The new model, dubbed The Freestyle, is all about portability and is unlike the bulky Premiere model that can produce up to a 130-inch display. The Freestyle projector comes packed with various advanced features, a 180-degree cradle stand, and weighs only around 830 grams. Let’s take a look at all the details right here.

Starting with the design, the Freestyle projector comes in a compact, cylindrical form factor, attached to a 180-degree cradle stand. The stand allows users to freely adjust the angle of the projector to cast a display on any wall or even the ceiling of a room. Furthermore, the projector can be attached to a standard E26 bulb socket using a base accessory to cast a screen on a tabletop.

As for the display, the Freestyle can produce up to a 100-inch screen with a 1080p resolution. Moreover, the users can easily scale the display as per their needs. Samsung also says that users do not need a white wall for getting accurate colors. The Freestyle comes with a Smart Calibration feature that enables it to adjust the colors of content depending on the color of the surface.

Coming to the portability aspect of the Freestyle, the projector comes with a waterproof case and a portable battery to allow users to take it on a camping trip or a whole-day picnic. Moreover, Samsung promises that they will not need an additional speaker as the Freestyle packs powerful built-in speakers with support for 360-degree audio.

Other than these, the Freestyle comes with most of Samsung’s Smart TV features and also allows users to mirror their TV screens onto a wall. They can also use the bundled lens cap of the projector to produce ambient lighting in a room. Plus, it comes with support for far-field voice controls via Samsung’s smart voice assistant Bixby.

Coming to the price and availability of the Freestyle projector, it is currently available to pre-order on Samsung’s official website at $899 (~Rs 66,770) in the US. If pre-ordered now, you are eligible to get a free $60 (~Rs 4,460) case for the projector. The offer will end on January 23.

As for the availability of the projector in other markets, Samsung says that it will gradually become available to buy in other regions over the coming months.