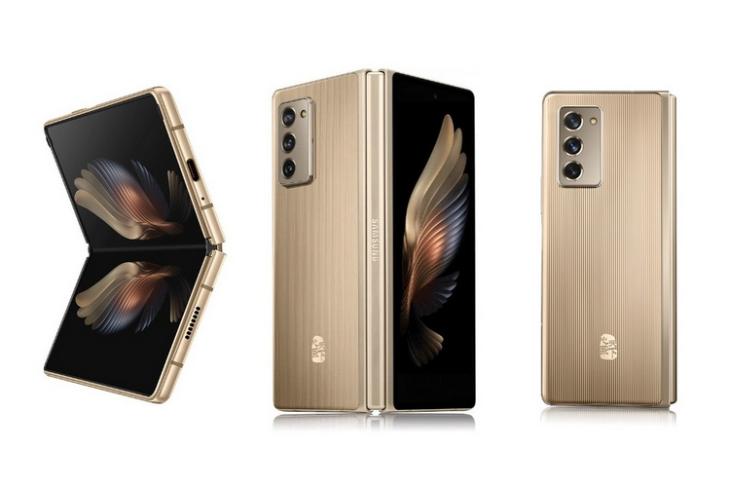 Having launched the Galaxy Z Fold 2 just a few months back, Samsung has now announced a new folding smartphone in China called the W21 5G. The device breaks from tradition by dropping the ‘Galaxy’ branding, but is otherwise pretty much identical to the original Z Fold 2 in terms of its hardware components.

It is, however, slightly taller than the earlier model, but that doesn’t seem to have affected its display specifications, as it seemingly retains the exact same screens as the existing model. Another notable difference is its back panel, which is now textured with vertical stripes. As seen in the images, it is also being offered in a garish golden color that may not be to everyone’s taste.

Like the Galaxy Z Fold 2 5G, the Samsung W21 5G features a twin-display setup that comprises of a 7.6-inch Dynamic AMOLED 2X panel and a 6.23-inch Super AMOLED screen with Gorilla Glass Victus protection. It is powered by the Snapdragon 865+ chipset and is being offered with 12GB RAM and 512GB of internal storage. The W21 5G also retains the Z Fold 2’s 4,500mAh battery with 25W wired and 11W wireless charging.

The camera specifications on the Samsung W21 5G is also identical to that of the Z Fold 2, although, there’s no confirmation if the components (sensors and lenses) are the same. The device comes with a triple camera setup (12MP+12MP+64MP) at the back and a dual-camera setup (10MP+10MP) upfront. It also features a side-mounted fingerprint scanner, 5G connectivity and dual SIM slots.

As mentioned already, the W21 5G is currently only available in China, with no word on whether it will ever be launched in global markets. It is priced at 19,999 yuan (~Rs. 220,000), which is at a premium over the original Galaxy Z Fold 2. You can check out the device on the Samsung China website.