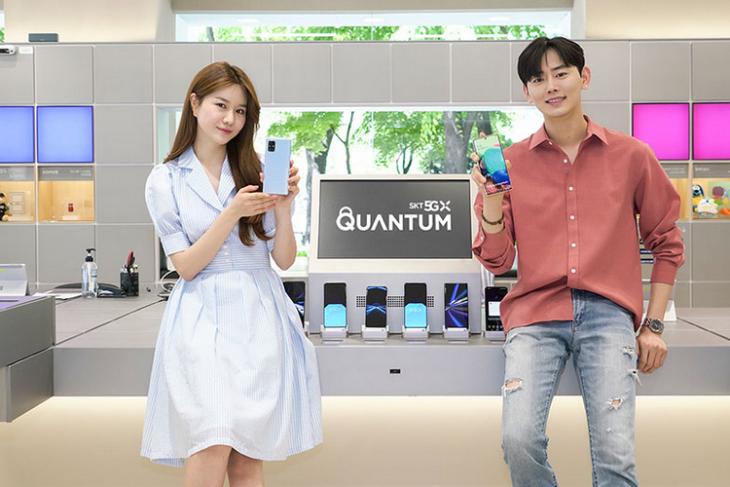 Samsung Electronics and SK Telecom have today announced a new smartphone with quantum encryption technology. Called Galaxy A Quantum, the device is essentially a repurposed Galaxy A71 5G, launched earlier last month. But what sets it apart is a new chipset that Samsung is describing as the world’s smallest quantum random number generator (QRNG). It will provide substantially enhanced security to people using payments apps and other services that need secure authentication protocols, says the Korean giant.

Apart from the QRNG chip, the device is essentially the same as the Samsung Galaxy A71 5G. It has a 6.7-inch FHD+ (2400 x 1080) Infinity-O Super AMOLED display and is powered by the Exynos 980 chipset. It also comes with 8GB of RAM and 128GB of storage that can be expanded using a microSD card.

Imaging options include a rear-facing quad-cam setup comprising of a 64MP primary shooter, a 12MP ultra-wide snapper, a 5MP telephoto camera, and a 5MP depth sensor. On the front, there’s a 32MP camera for selfies and video calling. The phone packs a 4,500mAh battery, an in-display fingerprint scanner, and runs Android 10 out-of-the-box.

The Galaxy A Quantum is currently available for pre-order in South Korea for 640,000 won (around $520 or Rs. 39,000) and will go on sale in the country from May 22. It’s not immediately clear if it will be available in international markets, but we’ll hopefully get to know more in the days ahead.