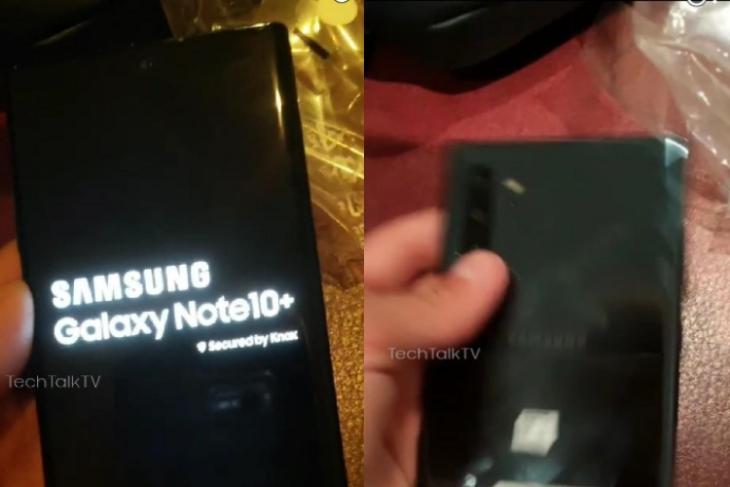 Samsung’s next Unpacked launch event, where it will unveil the flagship Note 10 series, is expected to be barely a month away. The rumor mill suggests an August 7 launch date for the Galaxy Note 10 and we’ve started to see a number of leaks pour in already. Samsung Galaxy Note 10 and Note 10 Pro were being rumored to be the two upcoming models for the company’s upcoming flagships.

Real-life images leaked by Twitter user @Mr_TechTalkTV, however, now change up things and suggest that the bigger and higher-specced Note 10 would be called the Galaxy Note 10+ (you can see the bootloader screen in the image above) and not the Galaxy Note 10 Pro as rumored just a couple of days ago.

The leaked image attached below gives us a clear look at the punch-hole at the center of the screen at the top, which will obviously catch your eye first. However, don’t forget to notice the smaller bezels all-around and Galaxy S10-like edge-curved display.

The punch-hole looks to be almost the same size (if not a tad larger) as before and would likely host the same 10MP selfie snapper as the Galaxy S10 lineup. It’s difficult to discern whether I like its center placement or not from the leaked images, but it doesn’t look bad either. 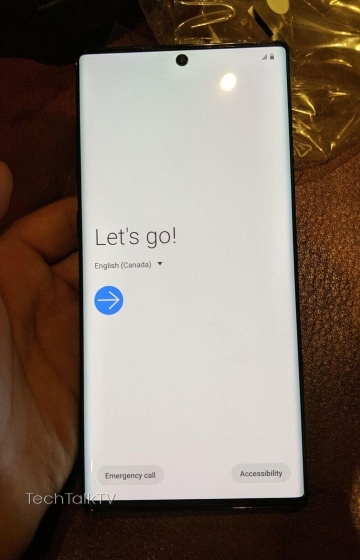 Further, the final leaked image shows off the back panel of the Galaxy Note 10+ but it’s blurred out – well, it looks the screenshot from the hands-on video wasn’t timed right by the tipster. However, you can see the vertical triple-camera module, with the TOF sensor and LED flash on the side if you look closely – putting it in line with the rumors that have surfaced recently.

Also, the design of the rear panel doesn’t appear to be ugly to me and looks perfectly in line with recent trends as opposed to certain leaks. It does seem like a really tall device though and it would be interesting to see the full-specs and handleability of the Galaxy Note 10+. What are your expectations from the Galaxy Note 10+? Let us know in the comments below.