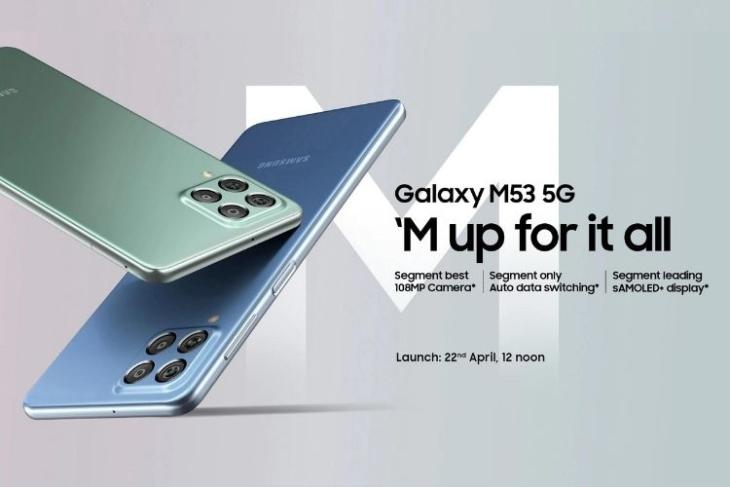 Samsung recently launched a slew of Galaxy A-series phones in India and now wants to focus on its Galaxy M series with the launch of the Galaxy M53 5G on April 22. To recall, the phone was recently introduced globally as another version of the Galaxy A73 5G, but with some differences. Here’s what to expect.

Samsung, via a Twitter post, revealed the launch date of the Galaxy M53 5G in India. The launch will take place on April 22 at 12 pm. It was earlier tipped by leakster Mukul Sharma.

The phone will be available to buy via Amazon India, which now has a microsite for it, thus, revealing a few details. As we already know, the Galaxy M53 5G will come with a Super AMOLED+ display and 108MP cameras, along with the “segment only auto data switching feature.” It will most likely be priced under Rs 30,000.

As for more details on the specs sheet, the Galaxy M53 5G will feature a 6.7-inch screen with a 120Hz refresh rate and a punch-hole in the middle. The device will be powered by a MediaTek Dimensity 900 SoC, paired with 6GB of RAM and 128GB of storage. It remains to be seen if the phone comes in multiple RAM+Storage variants in India.

The smartphone will have four rear cameras at its disposal – a 108MP main camera, an 8MP ultra-wide lens, a 2MP macro camera, and a 2MP depth sensor. A 32MP selfie shooter will also be present onboard. Features like Photo Remaster, Object Remover, and effects for video calling will also be included.

Other details include a 5,000mAh battery with 25W fast charging, Android 12-based One UI 4.0, a side-mounted fingerprint scanner, and more. However, the exact pricing and availability details are still unknown and to get all the information we need to wait until the April 22 launch, which is just around the corner. So, stay tuned for more information, and guess how much the Galaxy M53 will cost in India in the comments below.