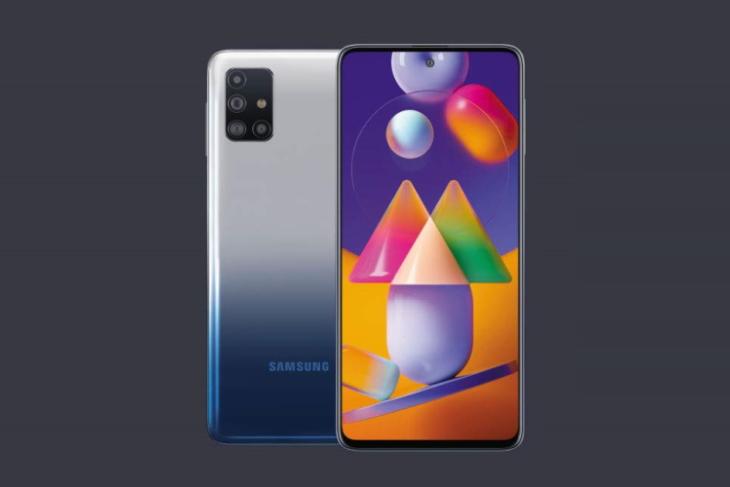 Samsung continues to quickly expand its Galaxy M-series to bring the latest features to the masses. Just five months after the launch of the Galaxy M31, the Korean giant has taken the wraps off its successor – the Galaxy M31s in India today. The device brings along a punch-hole display, 64MP quad-cameras, and fast-charging support in tow.

Galaxy M31s looks pretty much like its predecessor, with the square camera cutout on the rear. The physical fingerprint sensor on the rear is gone and you now see a center punch-hole cutout on the front.

The smartphone sports a 6.5-inch full-HD+ Super AMOLED display with a 20:9 aspect ratio and 2400 x 1080-pixel resolution. The punch-hole cutout on the front houses a 32MP selfie camera, which is great.

Under the hood, Galaxy M31s is powered by the Exynos 9611 chipset that’s also found aboard its predecessor. There’s up to 8GB of RAM and 128GB of built-in storage to go along with the chipset. The device runs Android 10-based OneUI Core 2.1 out-of-the-box.

As for the quad-cameras on the rear, Samsung has made minor changes to the sensor placement but it is still helmed by a 64MP (f/1.8) Sony IMX682 primary sensor. This is coupled with a 12MP ultra-wide camera, a 5MP macro camera, and 5MP depth sensor. Galaxy M31s is capable of 4K video recording with Super Steady mode for ultra-smooth shots.

The massive 6,000mAh battery aboard the Galaxy M31s is the same as its not-so-old predecessor. Samsung has, however, bumped up the fast-charging speeds. It now offers you 25W fast-charging as opposed to 15W on its predecessor earlier this year. You will find a USB Type-C port, 3.5mm headphone jack, WiFi 5, and Bluetooth 5.0 support onboard to round up the connectivity options.

Galaxy M31s has been priced at Rs. 19,499 for the 6GB+128GB base variant while the higher-end 8GB+128GB variant will retail at Rs. 21,499 in India. The phone will come in two color variants, namely Mirage Black and Mirage Blue. It will go on sale starting from 6th August, exclusively on Amazon India and Samsung’s website.