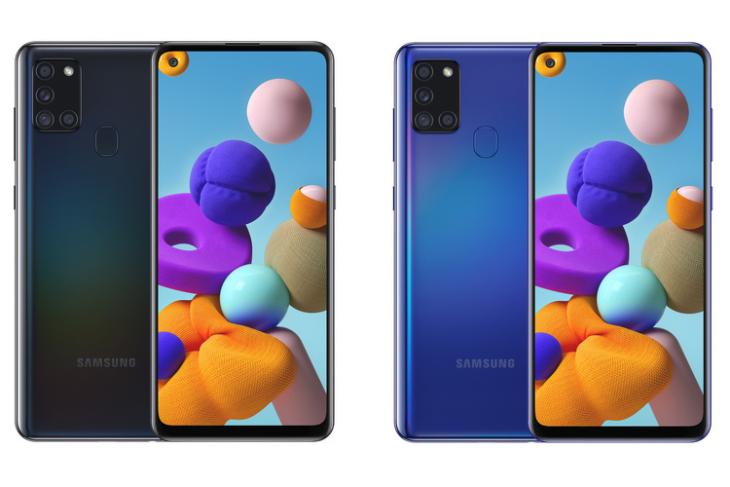 In a press release, the company said, “The Galaxy A21s offers must-have features at an affordable price. From 5G to best-in-class display, we are committed to bringing innovation to our Galaxy A Series portfolio”.

While the exact processor hasn’t been officially announced by Samsung, a Geekbench listing earlier this year suggested that it might be the Exynos 850.

The phone also comes equipped with a fingerprint scanner at the back and a 5,000mAh battery with 15W fast charging onboard.

On the software side of things, the phone comes with immersive Dolby Atmos audio and runs Android 10 with the company’s OneUI 2.0 skin on top. It offers facial recognition technology as a quick and secure unlocking option. The Galaxy A21s also comes pre-loaded with Samsung Health and Samsung Members apps.

The Galaxy A21s will be available to order in the UK from June 19th in Black, White, and Blue, with prices starting from £179.00 (around Rs. 16,000 / $210). The company is also offering six months of free Spotify Premium subscription with the Galaxy A21s and other select Galaxy A-series devices. There’s no word on whether the device will be launched in other regions around the world, including in India.

Samsung has today announced that the Galaxy A21s will be launched in India on June 17th. That’s two days before the device goes on sale in the UK, where it originally launched last month.

Samsung hasn’t mentioned anything about the pricing of the phone in India, or whether it will go on sale on June 19th or some later date in the country. However, we will get to know that on June 17th.

Awesomeness that goes on and on! The new Samsung #GalaxyA21s is coming your way. Follow this space to know more. #Samsung pic.twitter.com/YOuShYFeIF