Skip to content
Home News Samsung Schedules Galaxy A Event for March 17; Galaxy A53 and A73 Launch Expected 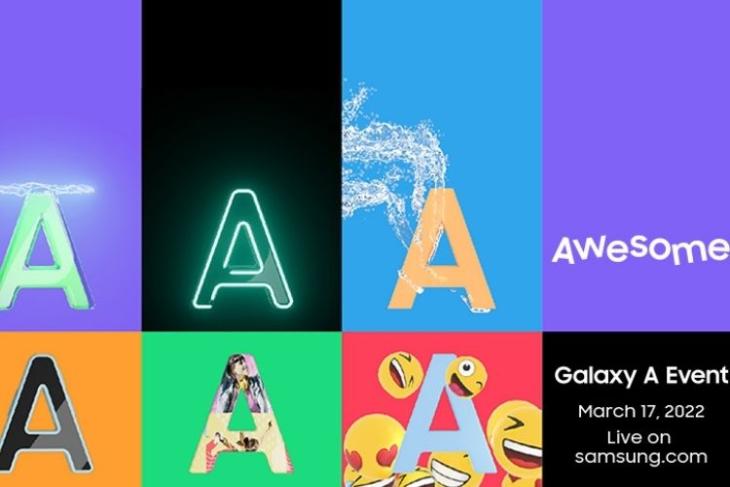 Samsung recently introduced the Galaxy S22 flagship series and now it’s time for the company’s second launch event of 2022. Samsung has announced a new Awesome Galaxy A Event, which will take place on 17th March, to introduce new Galaxy A smartphones. Here’s what you can expect from the upcoming Samsung event.

Samsung Galaxy A Event Is Happening This Week

Samsung’s Galaxy A Event will go live at 10 am ET (7:30 pm IST) on March 17 and will be an online one. It will be live-streamed on the company’s YouTube channel and even the Samsung Newsroom. The company has claimed that the Galaxy A smartphones will provide “the fully-loaded experience that people want from a smartphone.”

There are a few clues in the teaser posted on Twitter, though. The short teaser video has the “A” initial in various formats, each giving is a hint at some of the devices’ features. While one “A” is underwater and hints at support for an IP rating, there’s another “A” that tips at the stylish looks of the upcoming Galaxy A phones. Here’s a look at the teaser attached below:

It is believed that Samsung will launch the rumored Galaxy A53 and the Galaxy A73 smartphones at this week’s event. These two will join the recently announced Galaxy A13 and Galaxy A23 phones.

The Galaxy A53 and the Galaxy A73 will succeed the Galaxy A52 and Galaxy A72, respectively, from last year. The Galaxy A53 is likely to include an Exynos 1200 chipset, while the Galaxy 73 could be powered by a Snapdragon 750G SoC. Both phones could come with 5G support and have a 5,000mAh battery with 25W fast charging.

The Galaxy A53 and Galaxy A73 could be powerful mid-range smartphones. That said, we are yet to get concrete details on the new Galaxy A phones. Hence, it’s best to wait for the March 17 event to get a better idea. Do let us know your guesses about the Galaxy A event in the comments below!