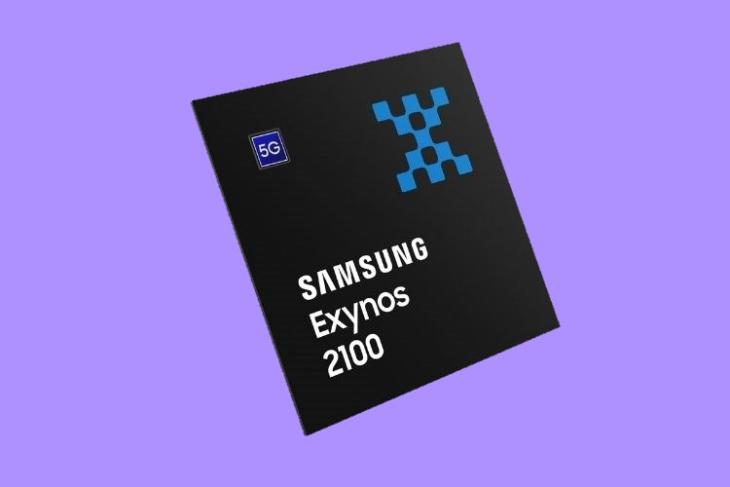 Samsung unveiled its first-ever 5nm chipset before the close of 2020. The Exynos 1080 holds this title but it is no flagship chipset. As promised, the Korean giant has taken the wraps off its flagship Exynos 2100 chipset at a virtual event today. It will rival the other 5nm-based flagship chipsets, i.e Apple A14 Bionic and Snapdragon 888, in 2021.

Samsung boasts that Exynos 2100 is the company’s first-ever premium 5G-integrated mobile processor. It’s built on the 5nm extreme ultra-violet (EUV) process node, which sounds similar to the one used to manufacture Snapdragon 888 chipset but it is not. Qualcomm has used the Samsung 5LPE (5-Nanometer Low-Power Early) process node. Both of these flagship chipsets are, however, being manufactured at Samsung’s 5nm foundry so there won’t be a huge process-related difference like last year.

When compared to last year’s Exynos 990 chipset, Samsung says that the Exynos 2100 will provide “up to 20-percent lower power consumption or 10-percent higher overall performance.” Further, the company boasts you can expect up to 30% better multi-core performance as compared to Exynos 990. The blog post reveals the presence of improved cache memory utilization and a stronger scheduler onboard as well.

The CPU cores are coupled with the ARM Mali-G78 GPU, which is said to offer up to 40% improvement in graphics performance. You will also find a tri-core NPU that can perform up to 26 TOPS (trillion operations per second) – the same as the Snapdragon 888. The company says it is also 2x power-efficient as compared to its predecessor.

Exynos 2100 comes with an integrated 5G modem. It can offer maximum download speeds up to 5.1 Gbps and 7.35 Gbps with sub-6GHz and mmWave 5G networks respectively. The chipset includes a new ISP that supports a single 200MP camera or 32MP+32MP dual-camera setups.

The chipset supports up to six sensors and can process data from four of them at the same time. This is a step above the Snapdragon 888, which can process only 3 camera streams at once. The cameras here can capture up to 8K @ 60FPS and 4K @ 120FPS videos. It also supports up to 4K displays with up to 120Hz refresh rate or up to QHD+ displays with a 144Hz refresh rate. You can read about the Exynos 2100 in detail right here.

The first Phone Powered by Exynos 2100?

In the official blog post, Samsung only revealed that the Exynos 2100 is currently in mass-production but didn’t name the first smartphone that will be powered by this flagship chipset. We, however, already know that the upcoming Galaxy S21 series will be the first to house the Exynos 2100 chipset under the hood in some regions such as India, UK, and others.

Samsung will unveil the Galaxy S21 series on January 14. The lineup will include three devices, the plastic-back Galaxy S21, the middle-child Galaxy S21+ with a glass back, and the premium Galaxy S21 Ultra with S Pen support.