Skip to content
Home Mobile Android Rocket VPN: A Simple VPN for Android Without Any Complications

In an age of constant internet surveillance, where your internet activities are being tracked by companies, governments and even hackers, VPN services and apps come in very handy. VPN apps on Android smartphones offer various uses like protecting your online identity, letting you use services that might be banned at your location and more. Thus, having a good VPN app for your Android smartphone is a must. While there are several VPN apps available on the Play Store, most are complex and not so easy to use. Thankfully, there’s one VPN app that is simple and without any complexities. We are talking about Rocket VPN app here.

Rocket VPN app is another great app from the folks at Liquidum and it brings all the VPN features we know of in a simplified package. If that interests you, let’s dive into the details, shall we?

When you first install Rocket VPN, you will have to set up a few simple things. If you are on Android 6.0 Marshmallow, the app will ask the required permissions, select “Allow” to permit the app. Then, select the location you want to access internet from. Once you have selected a virtual location, the app will ask a connection request. Select “Ok“, after which the connection will be made and a key icon will be activated in the status bar to suggest that Rocket VPN is active. 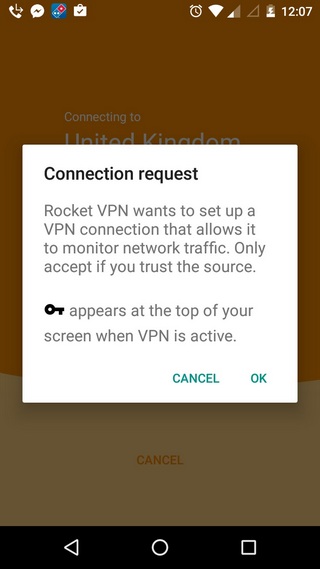 All Liquidum apps have great UI and Rocket VPN is no exception. The app looks straightforward and uses good colors & transitions to make things looks beautiful. All the action lies on the homepage itself, as it features the “Connect” button along with “Destination“, which lets you choose among the various virtual locations. Then, there’s a section where you can unblock apps and launch apps from your desired virtual location. If you scroll down below, you will find your monthly data usage and then your current location. 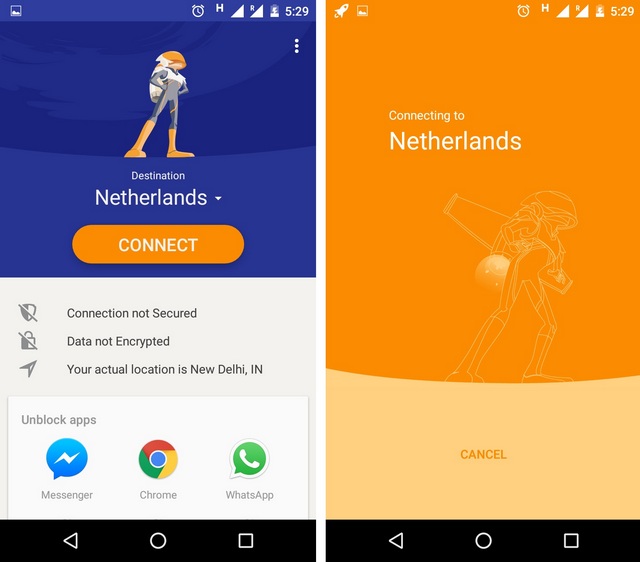 Like most other Android apps, the top right features the three dot button, with options to get the unlimited subscription, log in, feedback, FAQ and share. All in all, the user interface is clean and works for a VPN app with the ability to connect/disconnect and change location right on the homepage. 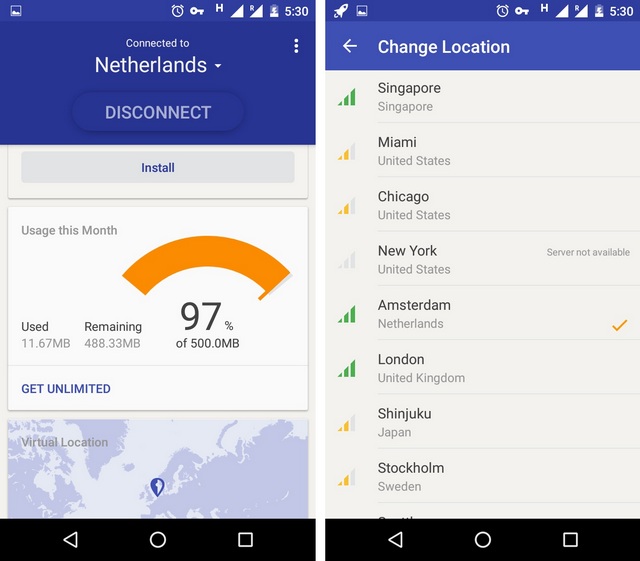 Rocket VPN makes sure that you can surf the web and access online content securely and privately. It encrypts all the personal info you give while using the internet to keep your privacy intact. The app also makes sure that third party services are not able to spy on your web usage.

Rocket VPN features a Quick Launch apps section on its homepage, where you can add apps that you want to run through a virtual location. So, simply connect the VPN service and launch the app. 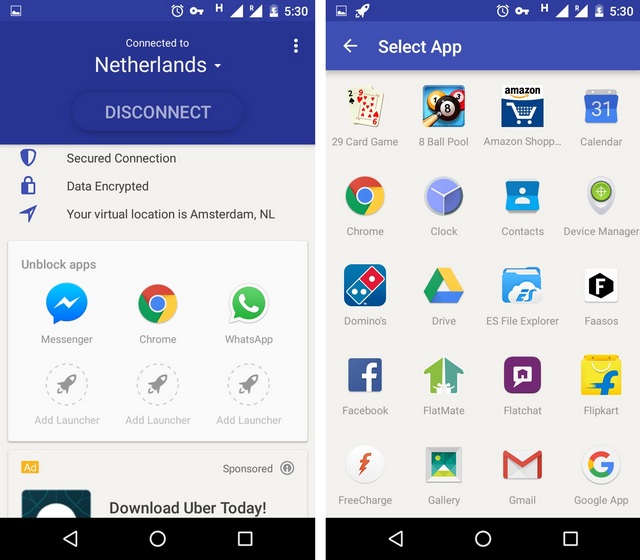 Apart from all these features, Rocket VPN lets you choose from 10 virtual locations across the globe including locations from countries like US, UK, Singapore, Netherlands, Germany, Japan and Sweden.

Do keep in mind that a location near to your actual location should bring you the best speeds.

While VPN apps do bring in privacy & security, they are also notorious for cutting down your internet speeds and thus, we did a test to find out if Rocket VPN too decreases the internet speed. Below is our usual internet speed compared to the speed when Rocket VPN was active.

As you can notice, the VPN app certainly cuts down the internet speed and that might due to the fact that we are using a free version. So, the conclusion is you can use the free version of Rocket VPN only if you are okay with your internet speed slowing down a bit.

Rocket VPN is most certainly the most user friendly VPN app we have come across. Even if you are new to VPN services, you will have no problem using Rocket VPN. Just select a location you want to surf the internet from and tap Connect and you are done. It’s that simple and the good thing is the app makes a connection swiftly. There is no settings page because you don’t really need one. Rocket VPN is aimed at users who don’t want to go through complex options and it works that way. If you are looking for advanced proxy settings, you might get disappointed.

However, the app isn’t without its limitations. Rocket VPN is a free app and thus, it incorporated ads and recommends apps in between sections on the home page. We don’t mind ads if they aren’t intrusive and while the in-page ads and recommends remain non-intrusive to the experience, the app did throw a full page ad once, which certainly annoys people.

Furthermore, the free version offers 500 MB/month and if you are an avid internet user, you would know that 500 MB will get used up in the blink of an eye. You can get the unlimited plan for a subscription of $2.99/month or $29.99/year, which not only bring unlimited bandwidth but better speeds and removes ads.

Unlike most VPN apps, Rocket VPN is for everyone. The app gets the job done without a user facing troubles with settings and troubleshooting. So, if that’s what you have been looking for in a VPN app, Rocket VPN is for you. So, give it a shot and let us know how you like it.