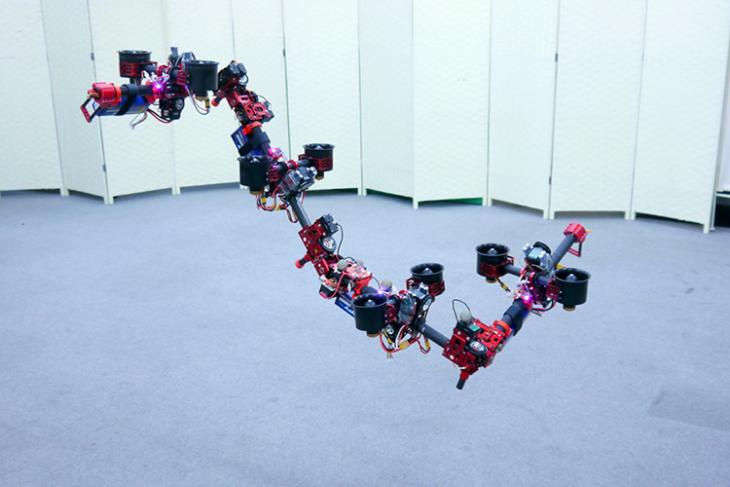 In spite of varying descriptions in different cultures – and different adaptations in pop culture, dragons are among the fiercest and the most proficient mythical creatures that humans have imagined, visualized, or encountered. Now inspired by this mighty creature, a crew of Japanese researchers has created a “dragon drone” which can change shape while flying.

“Dual-rotor embedded multilink Robot with the Ability of multi-deGree-of-freedom aerial transformatiON”, or rather just DRAGON, is actually a series of small drones. This thing can fly in different shapes like a curve or a square and even autonomously decide which shape to take based on the path it has to fly through or objects it has to avoid. The design is inspired by the tale of dragon kites which is made up of several smaller kites.

Each of the individual drones has a pair of fans which can be sped up or slowed down based on the thrust each part is required to produce. The mechanism uses an Intel Euclid development kit and has its battery pack distributed along its spine. At present, the DRAGON can fly for up to 3 minutes continuously but we can expect this to improve in future.

One of the applications this set of drones is that it can have is to fly up cramped spaces. However, its developers at the University of Tokyo envision a more compelling use case. They say that the DRAGON can have up to 12 modules in future and can be deployed as a “flying arm”, reports The Verge. It will be capable of handling and moving objects and could even be used to lift things.

In future, the robot will have a “multi-legged” design which means that it will not only be able to fly but to walk and maybe even run. Moreover, it will have the ability to autonomously choose whether to fly or walk, which in turn will conserve battery.