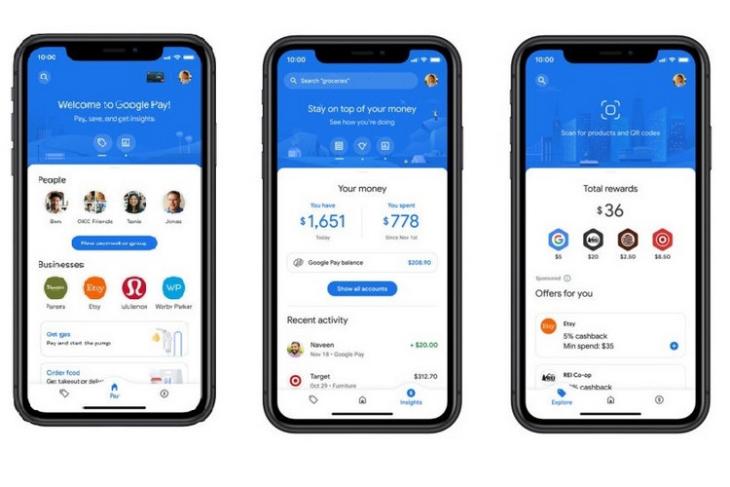 The US version of the Google Pay app on Android and iOS is getting a major design overhaul that makes it visually and functionally similar to the Indian version. The revamped app is currently in an invite-only ‘Early Access’ and, comes with a redesigned homepage subdivided into two sections – ‘People’ and ‘Businesses’. While the former shows a list of contacts who also use Google Pay and can be paid directly through the app, the latter lists nearby businesses that accept Google Pay.

On its official blog post, Google said that the new app “focuses on the friends and businesses you transact with most frequently” rather than showing a stack of cards with past transactions. However, it will still allow users to access quick payments, see earlier transactions, and find offers and loyalty info with a single tap. “You can also use Google Pay to order food at over 100,000 restaurants, buy gas at over 30,000 gas stations and pay for parking in over 400 cities, all from within the app”, said the company.

The new Google Pay will also be able to help users make better personal finance choices, the company claimed. As part of the plan, the app will now enable users to create groups to split dinner bills, rents, cab fares and other expenses with friends, neighbors and colleagues. “… you can create a group, split the bill, and keep track of who’s paid in a single place. Google Pay will even help you do the math on who owes what”, said the company. The app will also show offers and discount coupons from stores like Etsy and Target that can be applied with a single tap.

Finally, Google is also working with major financial institutions to create a new mobile-first banking service integrated into Google Pay. Called ‘Plex’, it will offer financial services by banks and credit unions, include checking and savings accounts with no monthly fees, overdraft charges or minimum balance requirements. Starting next year, 11 banks and credit unions in the US will offer offer Plex Accounts in Google Pay. In the meantime, users can join the waitlist to be one of the first to apply for a Plex Account from Citi or SFCU.