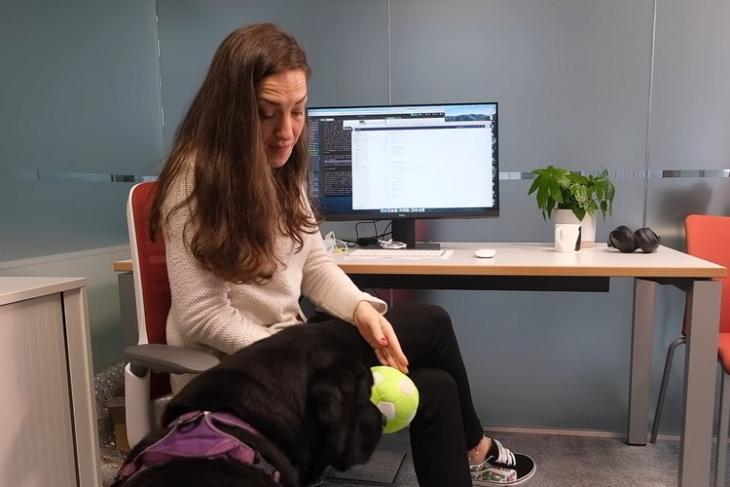 With the inception of the Coronavirus-led pandemic back in early 2020, humans understood the significance of video calls in their lives. While companies improved their video conferencing apps and services for their human users, a researcher from the University of Glasgow developed a nifty device for her pet Labrador that lets the dog video call her for a chat anytime from home. Yes, you read that right!

DogPhone Allows a Dog to Video Call their Owners!

Aptly named the DogPhone, the device has been developed by Dr. Ilyena Hirskyj-Douglas, a specialist in animal-computer interaction at the University of Glasgow’s School of Computing Science. She’s been working on various technologies to make the dog-human connection more real, and with the DogPhone, she wanted to “give dogs choices or options to do things for enrichment reasons.”

Dr. Hirskyj-Douglas developed the DogPhone in collaboration with her colleagues from the Aalto University in Finland. The device allows dogs to video call their owners anytime they want, using a ball that is fitted with an accelerometer to detect movements.

Now, during the testing of the device with her 10-year-old Labrador, Dr. Hirskyj-Douglas said that she was getting anxious when she was not getting a call from her furry friend at home. However, she says that it was okay as her dog was initially confused with the device, which is understandable, but was “perfectly fine with it” after a certain period.

You can check out a video showcasing Dr. Ilyena Hirskyj-Douglas and her bipedal friend using the DogPhone in the video attached right below.

“I think, from this experiment what is really demonstrated to me is that we can really form technology very differently for animals. Animals can be active users of technology. They can control technology. We just need to really reshape our thinking about how we see the future of dog technology,” Dr. Hirskyj-Douglas said in a statement.

She also published an official research paper, detailing her experiment, which you can check out right here.