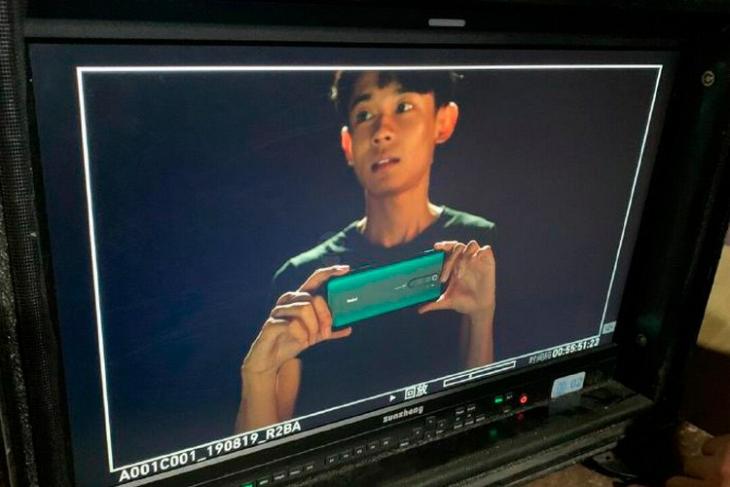 Believed to have been snapped during the filming of a promo video, the image shows the phone in a striking green color, and reveals that the rear-facing quad-cameras will be horizontally centered at the top rather than at the corner, in an apparent departure from how the device looked when it was certified by the FCC earlier. Do note that the bottom-most circular cutout in the elliptical camera housing is likely the fingerprint scanner, with the depth sensor seemingly moved to the side, below the LED flash.

Talking about the FCC certification, a new Redmi smartphone, rumored to be the Redmi Note 8 Pro, was listed recently on the FCC website with model numbers M1908C3JH and M1908C3JG, revealing some of its key specifications. The images posted on the FCC site also suggested that the device will sport a quad-cam setup at the back and a notch up-front to house the selfie-cam.

As per the listing, the device will have a 155mm (around 6.1-inches) display, and will measure 158.29mm x 75.3mm in size. It will support dual-band Wi-Fi, Bluetooth 4.2 LE, USB Type-C connectivity and a rear-facing fingerprint scanner. It will also be offered in 3GB+32GB and 4GB+64GB configurations, as per the listing.