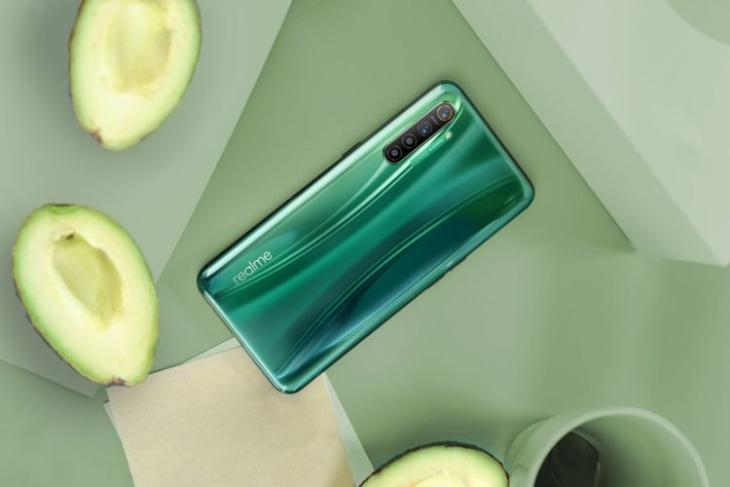 Realme is set to launch the much-awaited Realme X2 (previously known as the Realme XT 730G) in India at an event in New Delhi tomorrow. We already know everything about the smartphone, thanks to its China debut a couple of months ago. Our only anticipation from tomorrow’s event were the price and availability details but they now seem to have leaked online a day ahead of launch.

Well-known and usually reliable Indian tipster Ishan Agarwal has taken to Twitter to share what seems to be an image from Realme X2’s launch rehearsal. You can see in the image below that the Realme X2 will come in 3 attractive colors namely Pearl Green, White, and Blue.

Most importantly, you can see that Realme X2 will be priced starting at Rs 19,999 for 6GB RAM and 128GB storage. This pits it directly against the Redmi K20, which currently retails at Rs. 19,999 for the 6GB+64GB variant. You can go for Realme X2’s higher RAM variant (8GB+128GB) by shelling out another Rs. 1,000 later this week. The first sale is scheduled for December 20, exclusively on Flipkart and Realme’s online store.

Realme X2, for those unaware, is essentially the same device as the 64MP quad-camera-laden Realme XT that debuted in India back in September this year. It has bagged minor upgrades, including the Snapdragon 730G chipset in favor of the Snapdragon 712 on the Realme XT and support for 30W VOOC Flash Charge 4.0 charging technology. Rest of the specifications remain exactly the same.

Apart from the Realme X2, the company will use tomorrow’s stage to debut its first truly wireless earbuds – the Realme Buds Air in India. They boast a rather AirPods-like design, complete with a plastic build, 12mm Bass boost drivers, Bluetooth 5.0 support, wireless charging, touch controls, and well, what more do you need? The pricing details?

Realme Buds Air are expected to priced at around Rs 5,000 in India, as per recent leaks. It’s going to annihilate the competition at the price point but we will have to wait another day for the official announcement. So, stay tuned as we’ll bring you the official details from the Realme X2 launch event tomorrow.