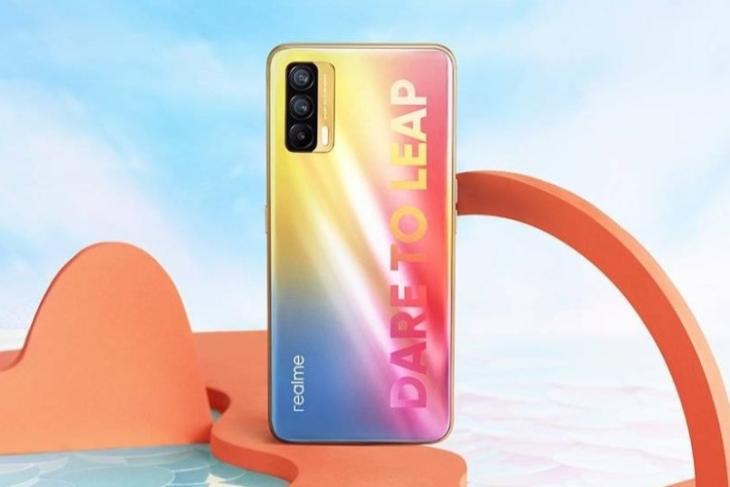 Realme has unveiled its first smartphone of 2021 in China today. Dubbed the Realme V15 5G, it is a successor to the 5G-enabled Realme V5 from last year. It boasts major upgrades on the display, camera, and charging front. There’s also a newer MediaTek 5G chipset on board.

Starting off with the design, Realme V15 5G doesn’t look a whole lot different from its predecessor. The Koi fish-colored gradient that’s achieved via a double-plating process, coupled with the huge ‘Dare to Leap’ tagline on the rear does make it stand out. If you don’t like the flashy gradient or massive text though, there’s also the minimal black and blue variants available for the Realme V15. The smartphone is merely 8.1mm thick and weighs 176-grams, which is pretty great as compared to many current-gen phones that weigh over 200 grams.

Realme V15 features a 6.4-inch Full-HD+ Super AMOLED display with a 60Hz refresh rate and a 180Hz touch response rate. It’s an upgrade over the IPS LCD panel present aboard the Realme V5. But the lack of a higher refresh rate is disappointing. It also has a 16MP punch-hole selfie camera at the top left.

Realme V15 also comes equipped with a newer MediaTek Dimensity 800U 5G chipset as opposed to the Dimensity 720 aboard its predecessor. It boasts dual-SIM 5G, dual-mode smart 5G support, up to 8GB of RAM, and up to 128GB of storage. The device runs the company’s latest Realme UI 2.0 skin based on Android 11. 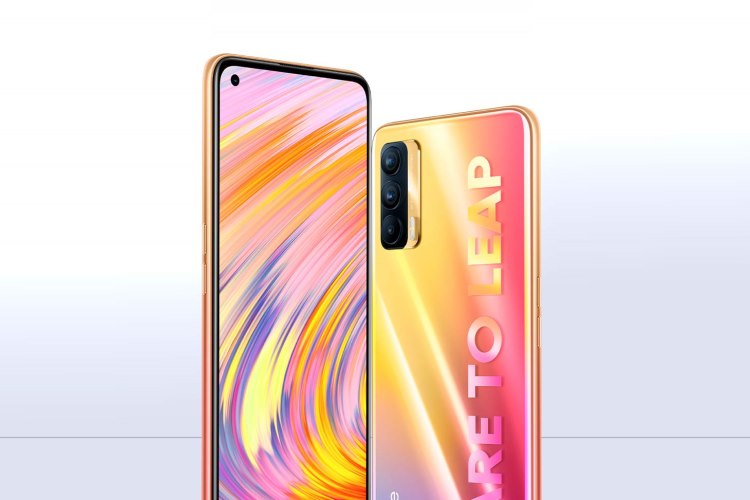 The triple camera system on the rear is helmed by a 64MP primary sensor. This is an upgrade over the 48MP sensor aboard its predecessor. You will also find an 8MP ultra-wide camera with a 119-degree FOV, and a 2MP macro lens onboard the Realme V15. The cameras here support 4K video recording, 1080p videos @ 120fps, UIS Max stabilization, and a lot more.

Realme V15 comes equipped with a 4,310mAh battery pack with 50W SuperDart fast-charging support. It is an upgrade over the 30W charging speed offered by its predecessor. The company boasts that you can fully juice up the battery in under 35 minutes using this charging technology. However, you get a 65W fast-charger in the box.

There’s no 3.5mm audio jack but the device includes a USB Type-C port, Bluetooth 5.1, and Wi-Fi 802.11ac to round up the connectivity options.

The smartphone will be available in three colorways, namely Koi, Mirror Lake Blue, and Crescent Silver. It goes up for pre-order today and will go on sale starting from 14th January in China. There’s currently no information on whether it will make its way to India or not.