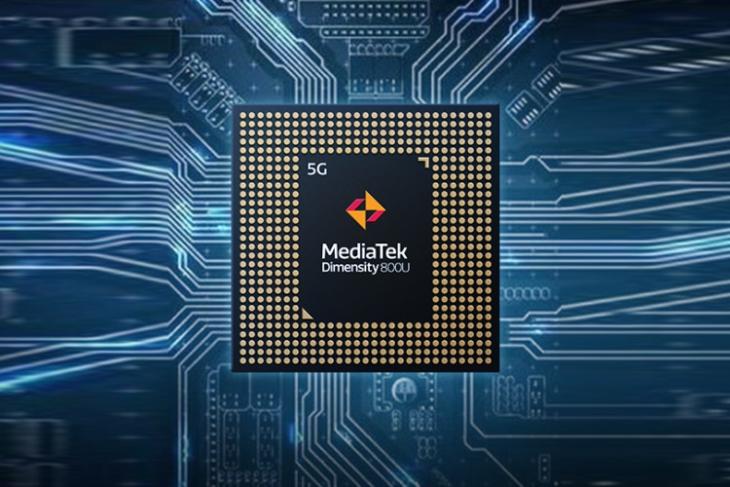 MediaTek continues to expand its 5G chipset lineup with the launch of new Dimensity chipsets. The chipmaker has announced the Dimensity 800U chipset today and it can essentially be seen as a younger sibling to the Dimensity 800 from earlier this year. It is the company’s sixth Dimensity-branded chipset and will help bring 5G connectivity to more mid-range phones in the coming months.

“In top titles, game launch times are up to 1.4s faster than Dimensity 700 series, while benchmark scores are up to 11% faster in CPU and 28% faster in GPU performance,” says MediaTek on the official Dimensity 800U landing page. The chipset comes with an integrated 5G modem, which supports Dual-SIM Dual-Standby, dual-mode 5G (SA/NSA), and carrier aggregation. It’s also backed by MediaTek’s 5G UltraSave tech.

This chipset includes an independent AI processing unit (APU) for camera and security enhancements. It supports up to 12GB of 2133MHz LPDDR4x RAM and UFS 2.2-type storage. What’s more, you will find up to 120Hz displays aboard phones powered by Dimensity 800U. It supports up to Full-HD+ resolution display, along with MediaTek’s MiraVision tech that enhances HDR10+ content playback.

As for the cameras, the chipset up to a single 64MP sensor or a 20MP+16MP dual-camera system. It supports up to 4K video recording, HDR-ISP, multi-frame noise reduction, and other camera features out-of-the-box.

Also, the support for key hardware components including a 120Hz display, up to 64MP cameras, LPDDR4X RAM (up to 2133MHz), and UFS 2.1 storage remains the same.

Dimensity 800U now joins the ranks of Dimensity 1000, 1000+, 800, 820, and 800 to bring 5G connectivity to a wider audience. MediaTek’s 5G chipsets have, however, been limited to phones in China to date. The company states we will see Dimensity-powered phones launch globally in Q4 2020.