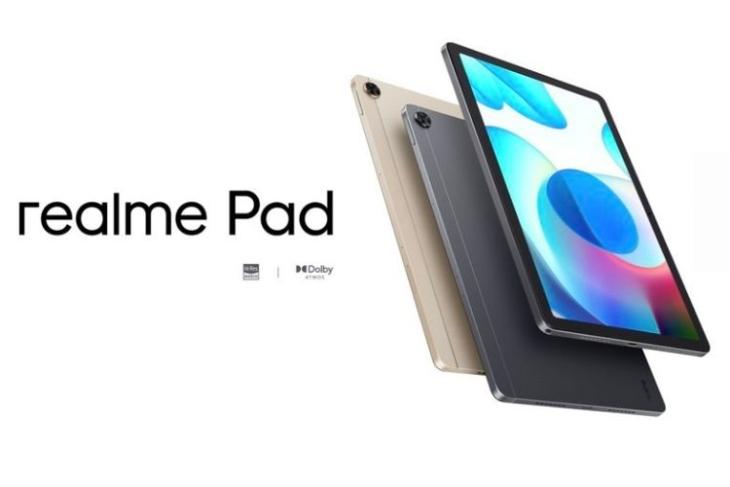 After expanding to the laptop segment with the launch of Realme Book Slim earlier last month, the Chinese giant has step foot into another product category today. Alongside the Realme 8i and 8s 5G, the company has unveiled its first-ever tablet called the Realme Pad in India. Realme had been teasing its tablet for many months, and well, it’s finally here with a premium design, MediaTek chipset, and a massive battery pack.

Starting off with the design, the Realme Pad features an all-aluminum alloy construction to give the tablet a premium and robust build. The tablet is only 6.9mm in thickness and weighs 440 grams. The tablet features a 10.4-inch WUXGA+ IPS LCD display with a 82.5% screen-to-body ratio and 2000 x 1200-pixel resolution. The panel supports four screen modes – Reading, Night, Dark, and Sunlight mode to give you complete freedom over your usage.

Unlike Xiaomi’s flagship-grade Mi Pad 5 series, Realme Pad comes equipped with a budget-centric MediaTek Helio G80 chipset. It is an octa-core 12nm chipset and you can see its performance and benchmark numbers right here. Users will also have up to 4GB of RAM and up to 64GB of internal storage. The tablet runs Android 11-based Realme UI for Pad and integrates Google Kids Space to make it safe for kids to use the tablet without any worries. The Realme Pad does not support 5G connectivity, but you do get 4G cellular connectivity, which is great. There’s a Wi-Fi-only variant of the tablet as well.

Though cameras on a tablet aren’t really meant to meet your mobile photography needs, they come in handy for attending video calls or scanning documents on the move. The Realme Pad includes an 8MP sensor on the back and an 8MP selfie sensor on the front for use with video conferencing apps. The cameras also support other features, including

To power the big screen and offer you a modest battery life, Realme Pad has a 7,100mAh battery pack. It supports 18W fast-charging via the USB Type-C port at the bottom. As for the battery life, the company claims to offer 12 hours of uninterrupted video viewing experience and 65 hours of standby time. It also includes quad speakers with Dolby Atmos support.