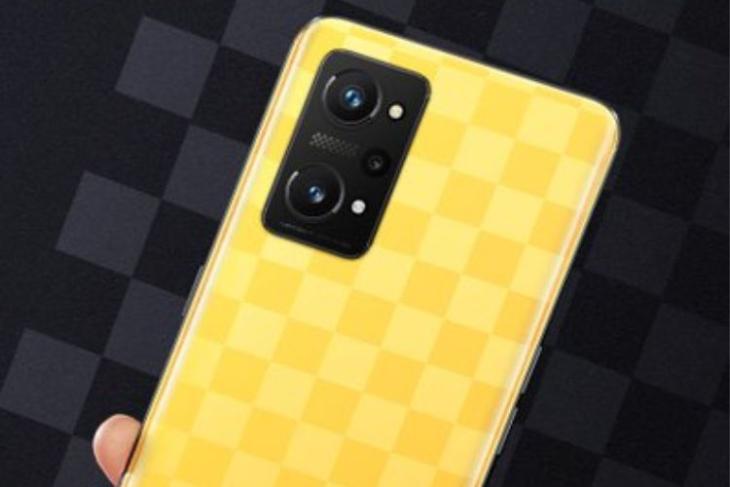 Realme recently confirmed that it will launch the Realme GT Neo 3T on July 7 as another variant of the recent GT Neo 3. Now, a few days ahead of this, it has given us a look at the GT Neo 3T design, which gives a look a different design compared to its sibling. Have a look.

This Is the Realme GT Neo 3T!

A recent Twitter post has shown the back panel of the Realme GT Neo 3T, which is slightly different from the GT Neo 3. It looks more like the Realme Q5 Pro and retains the big camera housings encased in a rectangular camera hump, which is painted black. This somewhat confirms that it is a rebrand of the Q5 Pro, which has been rumored lately.

The yellow-colored back panel has a checkered print throughout. This feels similar to the Neon Green color of the GT Neo 3. Other color options are also expected. The front part hasn’t been revealed but we can expect a punch-hole screen.

Realme has also confirmed that the phone will support 150W fast charging, much like the GT Neo 3 and even the OnePlus 10R. It will launch globally along with the Realme GT Neo 3, which is yet to make a global entry. The device has already been launched in China and India. A third phone is also expected but details on it aren’t available. Chances are it is the 80W variant of the GT Neo 3.

As for details on the Realme GT Neo 3T, we hardly know its spec sheet. But, besides the design, the specs are also expected to be the same as the Q5 Pro. Hence, you can expect the phone to come with an AMOLED display with support for a 120Hz refresh rate and be powered by a Snapdragon 870 chipset.

It is also expected to feature 64MP triple rear cameras, a 5,000mAh battery, and Android 12-based Realme UI 3.0. An in-display fingerprint scanner, Dolby Atmos support, and more are expected too. The phone is expected to fall in the mid-range but nothing is confirmed as of now. We will be able to update you with more details once the launch takes place. Therefore, stay tuned to this space more further updates.