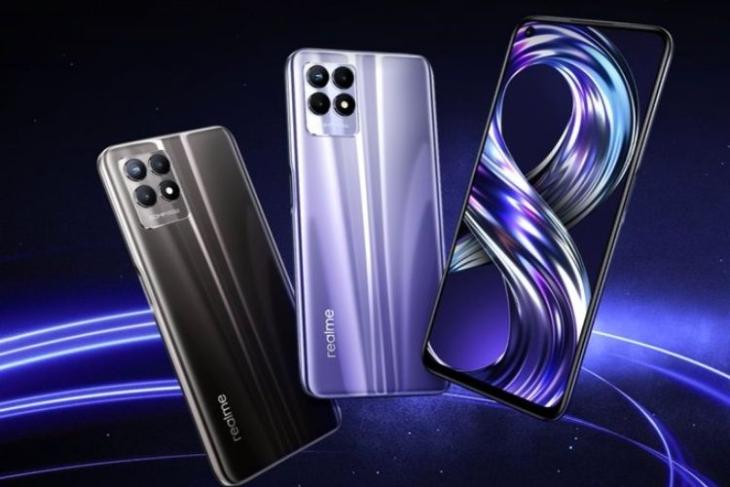 After launching the Realme 8 series in India earlier this year, the Chinese giant has launched two new smartphones under the Realme 8 line in India today. Dubbed the Realme 8s 5G and Realme 8i, these new devices come with various high-end features, including high-refresh-rate displays, 5,000mAh batteries, and more.

Before going to the price and availability of the Realme 8s 5G and Realme 8i, let’s take a quick look at their key specs and features.

Realme 8s 5G and Realme 8i Launched in India

Realme 8i: Key Specs and Features

Starting with the Realme 8i, the device boasts a 6.6-inch Full HD+ IPS display with support for a 120Hz refresh rate. Realme says that it is the first device in its price range to feature a 120Hz display. Plus, the display has a 2412 x 1080 resolution, a 90.80% screen-to-body ratio, and comes with the support for a 100% DCI-P3 color gamut. Plus, it has a 16MP AI-supported punch-hole camera on the front for selfies.

Under the hood, the Realme 8i packs the MediaTek Helio G96 chipset, which is a 12nm-based octa-core processor. It is coupled with up to 6GB of RAM and 128GB of internal storage. Plus, the device comes with Realme’s Dynamic RAM expansion (DRE) technology that virtually adds up to 5GB of RAM during high-performance situations. However, it is worth mentioning that the lower-end storage variant of the Realme 8i, which is the 4GB + 64GB model, does not support DRE. Nonetheless, there is a microSD slot for storage expansion up to 1TB onboard.

Other than this, the device packs a massive 5,000mAh battery with support for 18W fast charging. As per Realme, the Realme 8i could last for 28 days in standby mode, offer 47 hours of talktime, 40 hours of music playback, and 11 hours of YouTube streaming on a full charge.

In addition to these, the device comes with Bluetooth 5.0, high-speed Wi-Fi support, and GPS on the connectivity front. It features a triple card slot for dual nano-SIM cards and a microSD card. Furthermore, there is a side-mounted fingerprint scanner onboard as well. Realme 8i runs Realme UI 2.0 based on Android 11 out-of-the-box.

Coming to the colorways, the Realme 8i comes in two colors – Space Black and Space Purple.

Turning to the Realme 8s 5G, the device features a 6.5-inch Full HD+ IPS LCD display with an almost bezel-less design. The display panel comes with support for a 90Hz refresh rate, 90.5% screen-to-body ratio, a peak brightness level of 600 nits, and a 2400 x 1080 resolution.

Coming to the optics, the Realme 8s 5G, much like its sibling, rocks a triple-camera setup at the back. It includes a primary 64MP lens, a 2MP monochrome lens, and a 2MP macro lens to capture stunning images. There is also a 16MP AI-supported selfie snapper inside the punch-hole cutout on the front.

The chipset is paired with up to 8GB of LPDDR4x RAM and 128GB of UFS 2.1 storage. Plus, it comes with support for Realme’s DRE technology that virtually adds up to 5GB of RAM to the existing 8GB. It essentially takes the RAM of the device to 13GB, allowing for smoother multitasking and a lag-free UI experience. As for the battery, the Realme 8s 5G packs a similar 5,000mAh battery to its elder sibling. However, unlike the Realme 8i battery, the Realme 8s battery comes with 33W Dart fast charging support.

Other than these, the device comes with a 3-card slot for dual nano-SIM and a microSD card for storage expansion. As for connectivity, Realme 8s 5G supports several 5G bands and comes with a 5G network management system that intelligently balances the network usage and power consumption of the device. It runs Realme UI 2.0 based on Android 11 out-of-the-box.

The device also supports Bluetooth 5.1, Wi-Fi 6, and GPS capabilities. There is a USB-C port for charging and data transfer. The Realme 8s 5G comes in two colors – Universe Blue and Universe Purple.

As for availability, Realme 8s 5G will be available to buy from Realme’s official online store, Flipkart, and offline stores, starting from 13th September in India. The lower-end Realme 8i will go on sale starting from 14th September.

You Can Exchange Your Realme 8s for the Lava Agni 5G for Free; Here’s How!