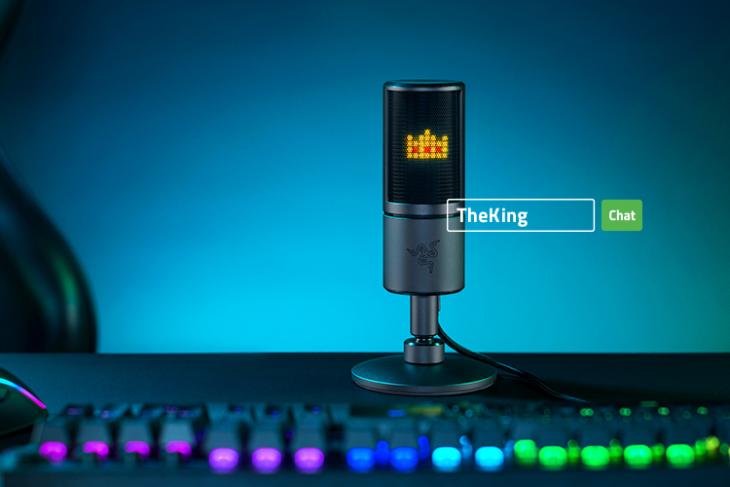 Just when you thought Razer is done bringing RGB and fancy lights to every possible device, the California based gaming hardware manufacturing company has a new microphone that can display colorful emoticons.

Named Razer Seiren Emote, this is the world’s first microphone to have a built-in LED display. The display shows over 100 animated and static emoticons based on various factors that take place during your live stream including new followers, subscriptions, and donations.

Moreover, the microphone allows you to create your own emoticons as well. It detects various keywords in the chat and displays relevant emoticons based on that. For instance, say someone sends a keyword like “king”, the Razer Seiren Emote will show the emoticon equivalent of the same.

For convenience, Razer has made the gooseneck of the microphone extendable. This way, you can set the height you want without messing up with your current desktop setup. Also, the microphone has a built-in shock mount to resist accidental knocks.

It is worth noting that you will have to install the Streamer Companion app from here to enable Stream Reactive Emoticons whenever you start a live stream. The app supports Windows 10, Windows 8, Windows 7 operating systems and Twitch, XSplit, Mixer, Streamlab streaming platforms. The company has mentioned that support for more streaming platforms will be added in the near future.

As far as the pricing is concerned, Razer has priced the Seiren Emote at $180. While the whole concept of this mic may seem a bit too fancy or gimmicky, it would serve as a way to stay unique, until other streamers buy the same microphone, of course.

So, will you consider getting yourself a Razer Seiren Emote to level up your streaming? Let us know in the comments.