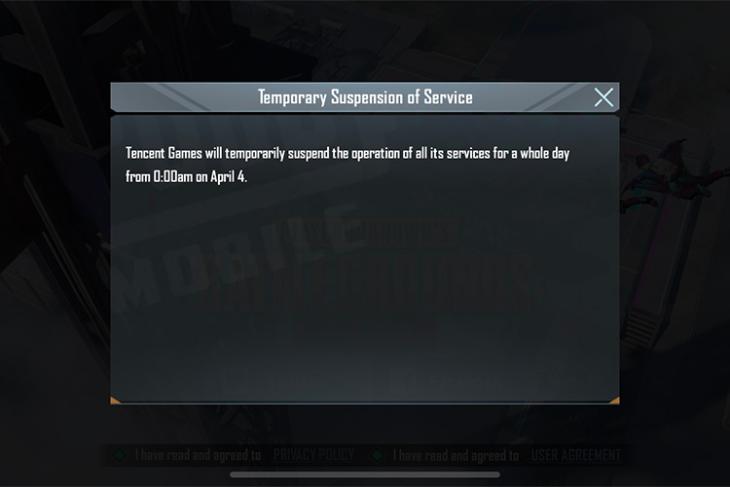 PUBG Mobile is showing up a notice right now that starting at midnight on April 4, Tencent Games will shut down all its services for a full day. The notice in the game, as shown in the image above, doesn’t elaborate much further than that. However, it makes it plenty clear that starting midnight tonight, PUBG Mobile will not work for the next 24 hours.

Naturally, this brings up the question “Why?”

Well, according to the official Weibo account of Tencent Games, the company has taken this decision to suspend all its services for one day to honor and offer condolences to those who have martyred in the fight against Coronavirus.

The post reads (translated from Chinese): “To express deep condolences to the martyrs and compatriots who died in the fight against New Crown Pneumonia, Tencent Games will be suspended for one day from 0:00 on April 4 thin, including mainland China and Hong Kong, Macao and Taiwan regions. May the dead rest in peace, may the living work hard, and may the motherland flourish.”

China is going to observe a “National Mourning Day” on 4th of April for victims of COVID-19, and Tencent’s decision is in accordance with that. In China, tomorrow, the national flag will fly at half-mast, and all embassies and public recreational facilities will be suspended across the country.

Alright, so the game seems to be working in India leading us to think that even though the company displayed the notice to everyone, the shutdown only affects the regions mentioned in Tencent’s Weibo post — Mainland China and Hong Kong, Macao, and Taiwan.

If you’re from one of these regions, let us know if the game has stopped working for you.

Also, if you’re not from any of these regions and the game is still not working for you, do let us know about that as well.