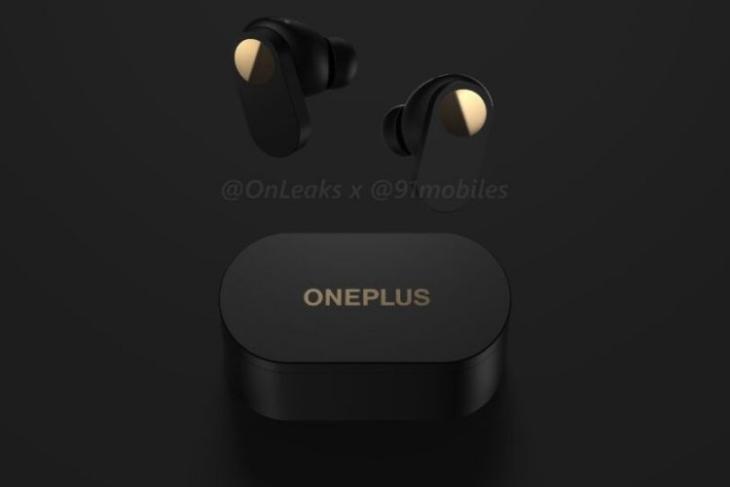 OnePlus has a fair share of audio products, which are both feature-rich and affordable. The company is now planning to launch a new pair of truly wireless earbuds, and this time, it is expected to arrive under the budget-centric Nord moniker. This would mark the Nord lineup’s entry into the audio segment. Here are the details.

Known tipster OnLeaks (via 91Mobiles) leaked the renders of the alleged OnePlus Nord TWS, which gives us an idea of what the earbuds could be like.

It is revealed that with new branding, OnePlus might go for a new, more flamboyant design as well. The Nord TWS design looks different from all the OnePlus Buds we have seen so far. As opposed to the OnePlus Buds Pro, the Nord ones feature a shorter but wider stem. While keeping an in-ear design, the tips appear to be angular, which could possibly be to ensure a better fit.

The earbuds are seen in a black colorway with golden accents to give a premium look. The charging case is pill-shaped, and it also has a golden-hued OnePlus branding on the lid.

Apart from the design, not much is known about the Nord-branded OnePlus earbuds. Although we can expect the audio accessory to come with support for Active Noise Cancellation (ANC), voice assistant, touch controls, and more. Since Nord devices carry mid-range prices, the Nord earbuds could come with a budget price tag, much like the OnePlus Buds Z earbuds.

OnLeaks emphasizes that these images are based on the “live images of final prototyping stage units,” and hence, shouldn’t be considered the final product. So, we advise you to take these details with a grain of salt. We will keep you posted on further updates. Stay tuned and let us know how you like the design in the comments below!