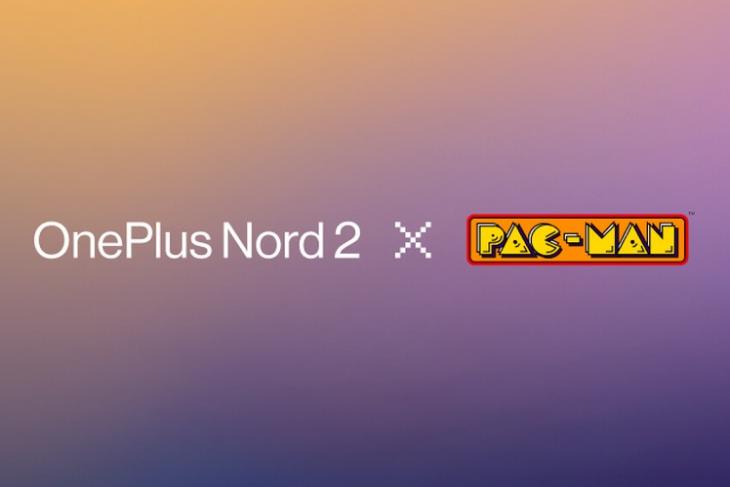 After launching the OnePlus Nord 2 back in July this year, reports about a special edition Pac-Man-themed Nord 2 started showing up online last month. Now, OnePlus has officially announced the OnePlus Nord 2 x Pac-Man Edition smartphone in India and the UK. Although spec-wise, the device is a standard OnePlus Nord 2, it does pack some tricks up its sleeve that you are going to love.

The Chinese giant announced the special OnePlus Nord 2 x Pac-Man Edition via an official blog post recently. It also shared official tweets via its official Twitter handles of India and the UK recently. So, as per the official post, there are a few significant differences between the standard OnePlus Nord 2 and the Pac Man edition.

The first major difference is in the physical color, material, and finish (CMF) department of the smartphone. Unlike the standard Nord 2, the Nord 2 x Pac-Man Edition comes in a special, “reimagined” back panel that features a dual film design. Underneath the first layer, the company has applied phosphorescent ink to the innermost layer that essentially makes the device glow in the dark. Yeah, read it write, the Pac-Man Edition OnePlus Nord 2 will glow in dark environments!

Secondly, OnePlus says that it has entirely redesigned OxygenOS to match the theme of the device. Apart from overhauling the UI and filling it with various Pac-Man-themed designs, the company has also hidden games, challenges, and hidden Pac-Man content throughout the software. Some of these also need to be unlocked within the device, although the company has not yet mentioned how.

Other than these, the Nord 2 x Pac-Man Edition is the same device as the standard Nord 2. It boasts a 6.43-inch AMOLED panel, a triple-camera setup with a 50MP primary lens, the MediaTek Dimensity 1200-AI chipset, and a 4,500mAh battery. As for the storage, the special edition Nord 2 comes in a single storage variant, packing 12GB of RAM and 256GB of onboard storage.

Now, coming to another important thing, OnePlus is running a contest where it will select three random winners to giveaway the special edition OnePlus Nord 2. So, if you are lucky enough and live in India or Europe, you can get the OnePlus Nord 2 x Pac-Man Edition or a free OnePlus Buds Z.

All you have to do is go to the official website of the company and play the web game that we have all loved since our childhood – Pac-Man. Once you complete a session of the game, you will be able to register your entry to get selected for the rewards.

The first part of the contest will end later today. In this one, he company will select three winners to give a Nord 2 x Pac-Man Edition to each of them. Other selected winners will get a chance to grab an early access voucher to purchase the special edition device along with a free pair of OnePlus Buds Z.

The second part of the contest will start on November 12 and last until November 15. Winners of this contest will get similar vouchers to claim a free OnePlus Buds Z with their orders of the Nord 2 x Pac-Man Edition. You can check out OnePlus’ official post to know more about the contests.

So, are you a Pac-Man fanatic who is willing to purchase this special edition Nord 2? Let us know your thoughts about the device in the comments below.