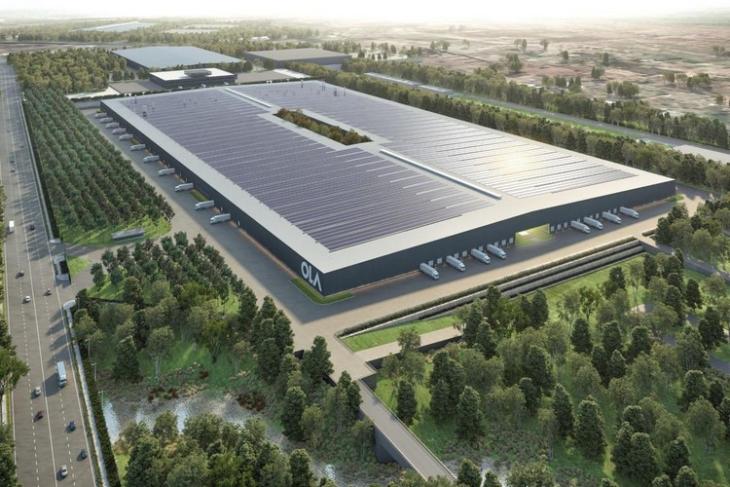 Citing the potential boom of electric vehicles in the Indian market, Ola Electric Mobility, a subsidiary of ride-hailing giant Ola Cabs, has announced to build the world’s largest electric scooter factory in India. Dubbed the “Future Factory,” Ola’s massive production plant aims to produce 10 million e-scooters annually. In addition to this, the company also gave us a first look at the e-scooter that it plans to launch in the coming weeks.

Now, before we get to the Ola e-scooter, let me give you some details about the Future Factory. It can be seen an ambitious Tesla-like Gigafactory being built in India.

Announced by Ola CEO Bhavish Aggarwal on Twitter, the company’s Future Factory will be set up in the Tamil Nadu region. The company reportedly invested around Rs. 2,400 crores into the project and aims to create 10,000 new jobs in the state.

The Bengaluru-based firm acquired a massive 500-acre land in the Krishnagiri district of Tamil Nadu. It plans to use 240 acres of land for building two supplier parks and the remaining 260 acres will accommodate the massive production plant.

Speaking of the factory, once opened, Ola plans to produce around 2 million e-scooters in the first phase. The company will be using 10 assembly lines, 3,000 robots, and nearly 10,000 workers to produce the electric two-wheelers. These will be retailed in India and exported to neighboring countries.

Now, Ola’s announcement of the Future Factory comes right after Tesla’s entry into the Indian market. Although the company had shared plans for building electric vehicles a long time, the timing here is perfect, considering India is now producing EV components locally. So, Ola’s Future Factory should give the “Make in India” initiative a huge boost in the coming years.

Coming to Ola’s first e-scooter, the company announced to launch the vehicle sometime in 2021 late last year. Now, Rushlane has got its hands on a few pictures showcasing the testing prototype of the Ola e-scooter.

So, going by the pictures of the Ola e-scooter, it looks similar to the Etergo AppScooter. Etergo, if you did not know, is an Amsterdam-based scooter startup that was acquired by Ola Electric last year.

Now, apart from the pictures, there is no official information about the e-scooter or its specs. However, if it is anything like the Etergo AppScooter, then it might use the same high energy density batteries to go up to a range of 240 km on a single charge. Moreover, it can go from 0 to 45kmph in around 45 seconds and features a digital instrument console on board.

The initial batch of the Ola e-scooter will be produced in Etergo’s production unit based in the Netherlands. Going into the future, however, Ola plans to produce its e-scooters in its Future Factory based in Tamil Nadu.

So, this was all about Ola’s e-scooter and its Future Factory which, once opened, will be the world’s largest two-wheeler EV production facility. Although the company plans to start production in the Future Factory in June this year, it might be difficult as the land is still in its excavation phase. Ola, however, does not want to deviate from its plans.