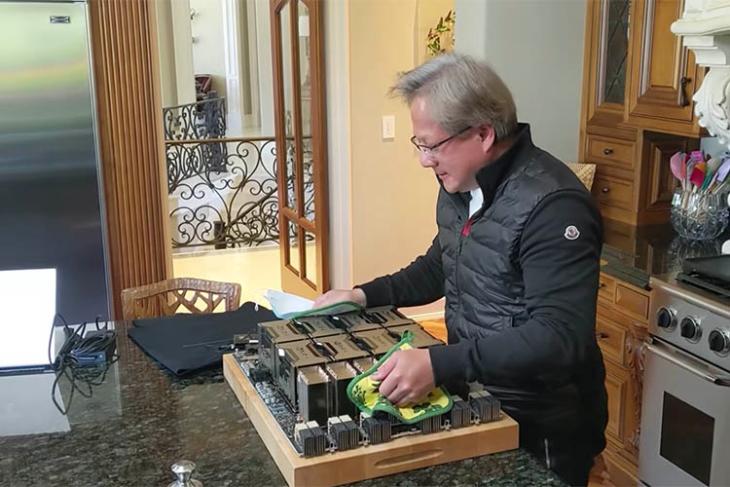 Late last month, Nvidia announced that it will hold its annual GTC conference in an online format this year on May 14. Now, a day before the pre-recorded keynote for GTC 2020 goes live, the company has posted a teaser to hype us all about what it’s going to unveil at its event.

The teaser, in full work-from-home mode, shows Nvidia CEO Jensen Huang opening his kitchen oven to show off what the company has been cooking for all this time, and it is one massive system. According to a report from Videocardz, the system Huang pulls out from the oven is the DGX or HGX A100 system.

Nvidia is expected to unveil its new Ampere architecture at tomorrow’s event, and the DGX A100 is expected to be one of the first systems to be built on Ampere. The DGX A100 will combine eight Tesla A100 GPUs, and, as spotted by Videocardz, now has larger heatsinks hinting that the interconnect bandwidth has gone up. Also expected is support for PCIe Gen-4 in the new DGX/HGX A100 system from Nvidia.

As mentioned in our earlier report, Nvidia isn’t expected to unveil gaming-oriented graphics cards tomorrow. Instead, the company will be focusing on showcasing its “latest innovations in AI, high performance computing, data science, autonomous machines, healthcare and graphics during the recorded keynote.”