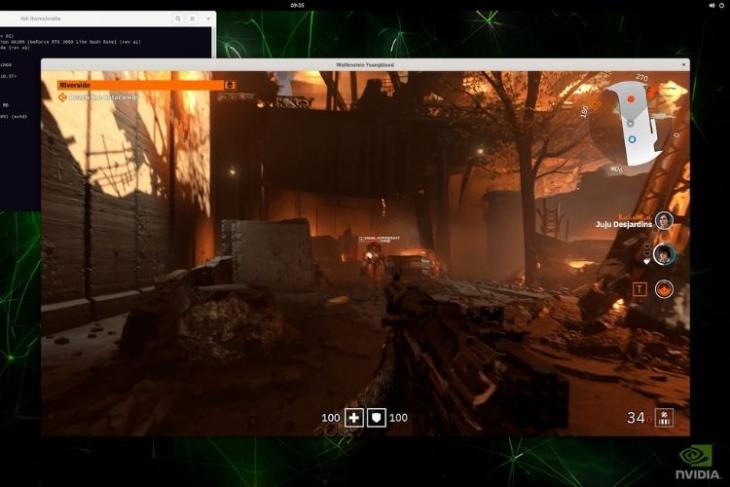 While GPUs may be in short supply due to the ongoing global chip shortage, Nvidia is not hitting the breaks on innovation. The technology giant recently launched its new RTX 3050 and RTX 3050Ti GPUs for Intel and AMD laptops. And today, Nvidia has announced that it’s taking a major leap to support another popular CPU architecture – ARM.

Yeah, you read that right. For the first time ever, Nvidia has demoed RTX support on an ARM-based platform. To achieve this feat, Nvidia paired an ARM-based MediaTek Kompanio 1200 CPU (used in Chromebooks) with the GeForce RTX 3060 GPU. The demo showed off real-time ray-tracing and DLSS in Wolfstein: Youngblood and The Bistro on an ARM platform.

Now, for those wondering, how ray tracing and DLSS support was made possible on an ARM processor for Chromebooks? Well, in an official blog post, Nvidia says that it has ported several of its RTX SDKs over to the ARM platform. While three of them, i.e RTXDI, NRD, and RTXMU, are ready for use, support for two more SDKs (RTXGI and DLSS) will arrive soon. You can all about these SDKs and what they do right here:

Nvidia is expanding RTX support, i.e advanced graphics and ray-tracing, to ARM CPUs to give gamers even more choices. ARM devices with Nvidia RTX graphics cards could offer a casual gamer the best of both worlds – a more power-efficient laptop with high-fidelity graphics support.