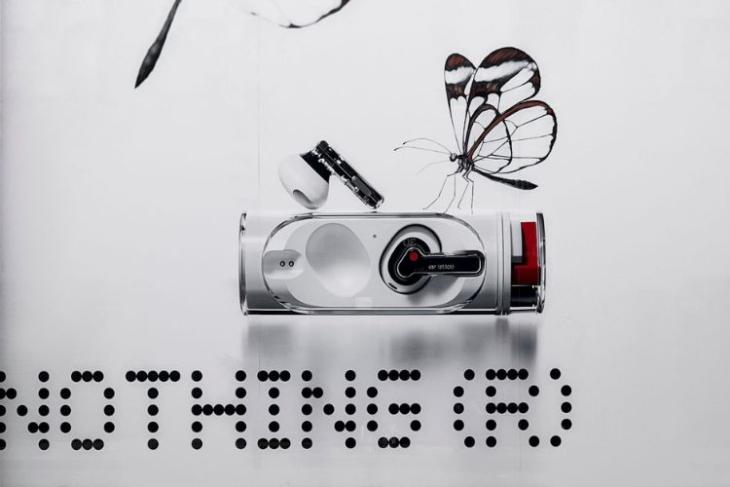 Nothing’s third product is here. As announced previously, the Carl Pei-led company has launched its second TWS called the Ear (stick) in India and globally. The earbuds carry the “Nothing” transparent vibe, a new elongated case, and some more improvements over the ear (1) launched last year. Check out the details below.

Nothing Ear (stick): Specs and Features

The Nothing Ear (stick) comes in a cylindrical case, which was previously revealed during the London Fashion Week during Chet Lo’s Spring Summer 2023 show. The charging case boasts a transparent look and to me, resembles the asthma pump, as I pointed out earlier too.

The earbuds, in question, look similar to the ear (1). There’s a semi-transparent finish to showcase the internals of the earbuds and the Ear (stick) branding. Nothing claims that the Ear (stick) is “ultra-comfortable, lightweight and ergonomic.” It weighs 4.4 grams, which makes it a tad bit lighter than Nothing’s first TWS. The earbuds come with redesigned antennas for better connectivity.

The Ear (stick) also comes with a 3-high-resolution mic setup and 12.6mm custom dynamic drivers, bigger than the 11.6mm drivers of the ear (1). To ensure that the bass output is good, the Ear (stick) comes with Bass Lock so that the bass stays. Plus, the Nothing X app includes the redesigned customizable equalizer to make adjust the bass, treble, and more. This, along with the custom gesture controls and more are available directly in the Phone (1) for seamless usage.

The earbuds support improved Clear Voice technology too with improved algorithms for 31dB noise elimination, especially during calls. There’s no support for ANC, though. This is slightly surprising given that it is priced higher than the ear (1). It comes with a total battery life of up to 29 hours. There’s support for fast charging too, so, you can get up to 2 hours of playback time in just 10 minutes of charging time.

Instead of touch controls, the Ear (stick) goes for a physical button to enable press controls for pausing/playing music, increasing/decreasing volume, and much more. Additionally, it supports an IP54 rating, Google Fast Pair, AAC/SBC audio codec, Bluetooth version 5.2, USB-C for charging, and more.

The Nothing Ear (stick) comes with a price tag of Rs 8,499, which is slightly pricier than the ear (1). It will be available to buy via Flipkart and even Myntra as revealed earlier. The limited sale will start on October 28 while the open sale begins on November 4.

The Nothing Ear (stick) comes in a single White color. While it is up for pre-order globally, there’s no word on when this will happen in India. So, do you like the new Nothing TWS? Let us know your thoughts in the comments below.