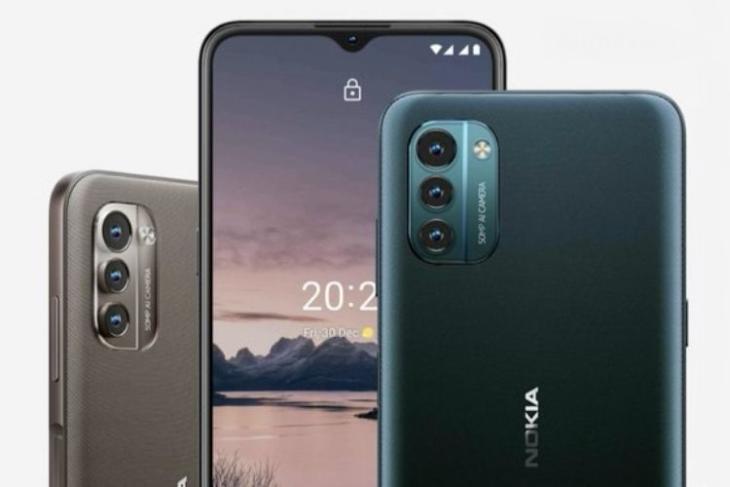 Nokia has launched a new budget smartphone, the Nokia G21 in India. The phone was previously introduced globally in February and is a successor to the Nokia G20. It comes with features like a 90Hz display, 50MP cameras, and more. In addition, Nokia has introduced two new TWS earbuds, a new variant of the Nokia C01 Plus, and two feature phones too. Here are all the details to know.

The Nokia G21 looks similar to the recent Moto G52 budget phone with an oval-shaped rear camera hump. However, it ditches the punch-hole screen and settles for a rather obsolete waterdrop notch.

The 6.5-inch IPS LCD display supports an HD+ screen resolution and a 90Hz refresh rate. It is powered by a Unisoc T606 chipset with up to 6GB of RAM and 128GB of storage.

This is another phone with a 50MP main camera, amongst the numerous ones that have launched recently. The main snapper is accompanied by a 2MP macro camera and a 2MP depth sensor. There’s an 8MP front camera. The Nokia G21 is backed by a 5,050mAh battery with 18W fast charging and runs Android 11 (could have been Android 12, though!). That said, Nokia promises three years of security updates and two years of major updates.

Additionally, the phone includes a side-mounted fingerprint scanner, a 3.5mm audio jack, and more. It comes in Nordic Blue and Dusk color options.

The company has also introduced a 2GB of RAM+32GB of storage variant of the Nokia C01 Plus in India too. It comes with a 5.77-inch HD+ display, an octa-core chipset, a 3,000mAh battery, Face Unlock, Android 11 Go, and more.

Additionally, the Nokia Go Earbuds+ and Comfort Earbuds have been added to the company’s portfolio too. The Nokia Go Earbuds+ come with an IPX4 rating, up to 26 hours of playback time, touch controls, 13mm drivers, and more. The Nokia Comfort Earbuds support an IPX5 rating, a total playback time of up to 29 hours, 10mm drivers, touch controls, and more.

All these products will be soon available to buy via Nokia’s website and retail stores too.