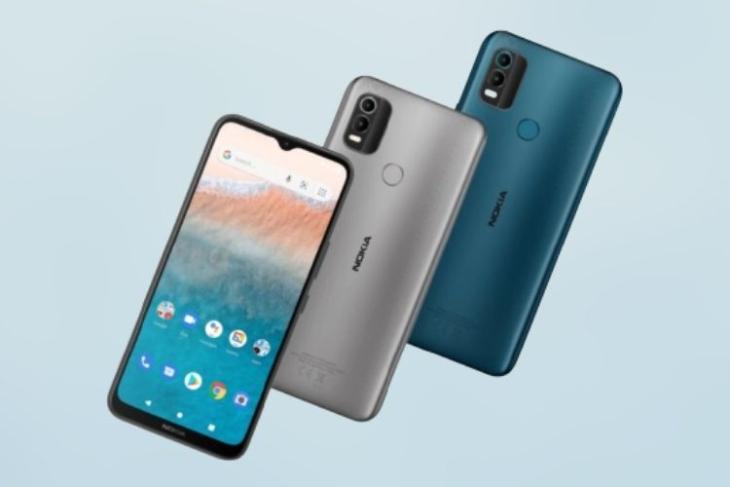 During its MWC 2022 event in Barcelona, HMD Global launched three new budget smartphones under its Nokia C-series. These include the Nokia C21, C21 Plus, and the C2 second-edition smartphones, which run the stripped-down Android Go software. Let’s take a look at each of the new devices in this article.

The Nokia C21 and the C21 Plus come with a 6.5-inch HD+ display with an aspect ratio of 20:9 and a teardrop-notch to house the 5MP selfie shooter. While the standard C21 comes with a single 8MP rear camera, the higher-end C21 Plus has a dual-camera setup at the back. It includes a primary 13MP sensor and a 2MP depth sensor.

Other than these, the Nokia C21 Plus comes with an IP52 rating for water and dust resistance, while the standard model does not have an IP rating. The devices have a fingerprint sensor on the back and run Android 11 Go Edition out of the box, instead of the latest Android 12 Go Edition. Hence, they come with light versions of Google apps such as Google Go, Gmail Go, and others. As for the color variants, the Nokia C21 comes in Dark Blue and Warm Grey colors, while the C21 Plus comes in Dark Cyan and Warm Grey colorways.

Now, coming to the Nokia C2 Second Edition, it is the most inferior device amongst the lot, featuring a 5.7-inch display with an 18:9 aspect ratio and a maximum resolution of 480 x 960p resolution.

Under the hood, the device includes a quad-core MediaTek chipset, paired with up to 2GB of RAM and 32GB of internal storage. Much like the Nokia C21 phones, the second-gen C2 comes with an in-built microSD slot to expand the storage up to 256GB. There is a measly 2,400mAh battery with 5W charging support powering the device.

As for connectivity features, the Nokia C2 Second Edition supports 4G networks, has a dual-SIM slot, and comes with support for Wi-Fi 4 and Bluetooth 5 technologies. It has a micro-USB port for charging and data transfer and a 3.5mm audio jack.

Moreover, the Nokia C2 Second Edition also runs Android 11 Go Edition out of the box and comes with lighter versions of Google apps pre-installed. It comes in two color variants.

So, what do you think about these new budget-focused Nokia C-series devices? Let us know your thoughts in the comments below.