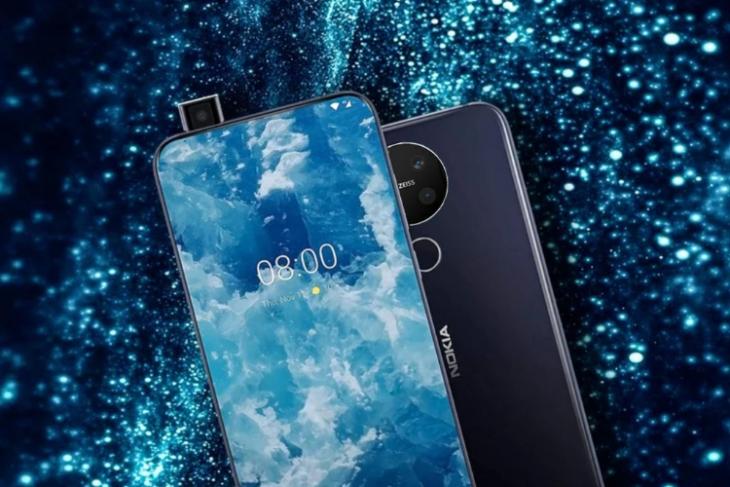 Nokia 6.2 and Nokia 7.2 launched a couple of months ago at IFA 2019, ushering in a new era of Finnish design philosophy for HMD Global. The company has since been expanding the reach of these phones across the globe. Now, reports of a Nokia-branded phone with a pop-up selfie camera and 5G support have been flooding the Internet.

This smartphone is rumored to be called the Nokia 8.2 and fresh reports now suggest that it will launch at MWC 2020 early next year. Earlier it was said that HMD Global will be unveiling two Nokia 8.2 variants – one with 4G and another with 5G support. Sources that are close to NokiaPowerUser, a popular Nokia-focused blog, reveal that it isn’t true. Only the 5G variant of the Nokia 8.2 will be launched next year.

As for the raw hardware specs, Nokia 8.2 is expected to be powered by the Qualcomm Snapdragon 735 chipset that’s yet to go official. It has leaked a couple of times and is known to come with an integrated 5G modem. It will be the next-gen mid-range chipset from Qualcomm, bringing 5G connectivity to more devices and eventually more users.

If this chipset is based on the latest 7nm process and features all the bells and whistles including an AI Engine, Game Boost, and other flagship features, then it would be great. Apart from the processor, Nokia 8.2 is expected to sport a 64MP rear camera and 32MP pop-up selfie camera. There’s currently no information on the display, battery, cameras, and other specs of the device.

Some reports, however, do suggest that Nokia 8.2 will be priced somewhere in the $500 ballpark. Juho Sarvikas HMD Global’s Chief Product Officer has confirmed that a value-focused 5G phone is currently in the works and should launch really soon. What do you expect from Nokia’s first pop-up camera phone? Let us know in the comments below.

Nokia 8.2 to Be the First Nokia Phone with A Pop-up Selfie Camera