The original Nest Learning Thermostat was released in October 2011 with an asking price of $249. Subsequent generations with iterative optimizations and improvements have been launched since then, with the second-gen devices announced the very next year and the third-gen devices, exactly a couple years back in September 2015. While that particular device continues to remain available for purchase, Nest Labs has now gone ahead and released a new iteration of their popular thermostat at a slightly reduced price-point. Called the Nest Thermostat E, the device costs just $169, and although it retains many of the same features as its pricier counterpart, there are a few notable differences between the two. That being the case, let’s take a more detailed look at some of the similarities and differences between the all-new Nest Thermostat E and the third-generation Nest Learning Thermostat:

The first thing you notice about the Nest Thermostat E is that the company has quietly dropped the ‘Learning’ moniker from the device’s name, even though it is still powered by the same artificial intelligence (AI) algorithm that will ‘learn’ from your preferences in the first few weeks of use. The ‘E’ in the name apparently stands for ‘ease of use’ and ‘energy efficiency’, if a marketing video released by the company is anything to go by.

In terms of design, the Nest Thermostat E and the third-gen Nest Learning Thermostat are both circular in shape, but there are a few notable differences between the two. While the older device was meant to stand out, the new device is designed to blend into the background like most standard thermostats. That being the case, the metallic ring that can be found around the edges of the original device is noticeably absent on the ‘E’ variant, which ships instead, with a white plastic ring that apparently has a ceramic-feel finish.

The outer ring, unfortunately, is not the only thing plastic about the new device. It’s encased entirely in a polycarbonate body instead of a metallic one that its more premium stablemate comes with. Having said that, the Nest Thermostat E still features the familiar rotary dial that wraps around the device and can be used to control the temperature settings. Overall, the new device measures 3.19-inches in diameter and weighs 139 grams, while the older one is slightly larger and heavier, measuring 3.3-inches and tilting the scales at 243.7 grams.

As for the display on the Nest Thermostat E, it comes a white, frosted overlay on top of a black background, making it look grayish when switched off. The display quality, however, takes a big hit, seeing as the new model only ships with an 1.76-inch 320×320 panel, whereas the older version features a larger and sharper 2.08-inch screen with a 480×480 pixel resolution. The E also comes with half the amount of memory; just 256MB instead of the 512MB available on the flagship device.

Much like its older sibling, the Nest Thermostat E can also be controlled via the mobile app that’s available on both Android and iOS. The device also comes with pre-configured scheduling options that can be managed directly from the aforementioned app. As mentioned earlier already, the new model also has the exact same learning capabilities as its pricier counterpart, and you can also control it with voice commands via Amazon’s Alexa or Google Assistant, but there are a few key differences between the two in terms of the sensors that we need to point out here.

While Nest has cut costs on the hardware side for the most part, there is at least one software feature that seems to have also become a victim of the company’s cost-cutting endeavor. Called ‘Farsight’, a Nest Learning Thermostat feature makes use of the device’s internal motion sensors to detect movement near the device and, switch on its screen to display the time or temperature. While that feature is notably absent in the new version, it still includes the motion-sensing technology, so it can still switch off the cooling based on whether someone is home or not.

Even though the Nest Thermostat E comes with reduced functionality on many fronts, it does come with at least one new feature called ‘Basic Schedule’ that, according to Nest Labs, will result in significant energy savings by offering the perfect balance between comfort and economy.

According to the data gathered by Nest’s online compatibility tool, the Nest Learning Thermostat is believed to work with 95% of the 24V HVAC (Heating, Ventilation and Air-conditioning) systems in use in American homes, while the new device will ‘only’ be compatible with about 85% of the systems, including gas, electric, forced air, heat pump, radiant, oil, hot water, solar and geothermal. According to the official Nest website, both devices are designed to work without a common C wire, although, some specific cases may require the installation of new C wire, so you’ll need to check for that before buying a new Nest Thermostat for your place. 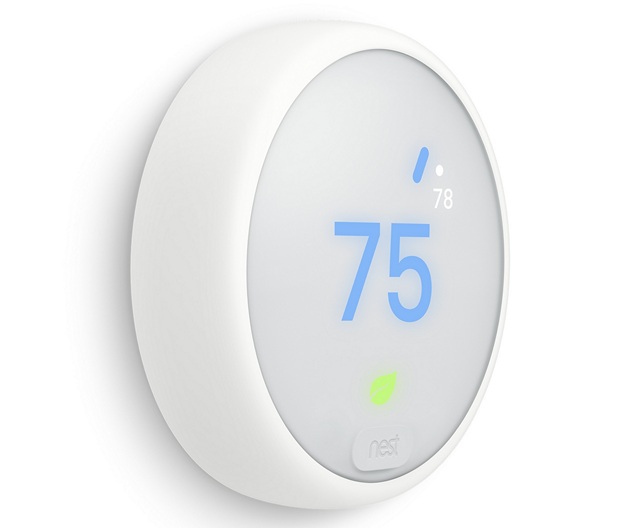 As mentioned earlier already, the Nest Thermostat E comes with a price-tag of $169, which makes it $70 cheaper than the Nest Learning Thermostat, which is priced at $248 on Amazon. While you can buy the latter in four different colors – white, copper, black, and stainless steel – the new device is available only in white, and is up for pre-order on Amazon right now, although, it will only start shipping from September 11. In case you’re confused about whether to save the $70 and get the new device or spend the extra few bucks and buy the flagship device, maybe the following piece of info will help make your decision a bit easier. While the Nest Learning Thermostat comes with a two-year warranty, the Nest Thermostat E gives you a warranty of just one year.

Nest Thermostat E vs Nest Learning Thermostat: Which One Should You Buy?

This is a tough question to answer because different people have different expectations from their smart home devices. If you are a tech-savvy person who values specs above all else and, is willing to spend $250 on a smart thermostat with functions that may lose their novelty factor a few weeks down the line, then the third-generation Nest Learning Thermostat is obviously a better choice, given that it is better device overall in terms of both hardware as well as software. However, if you’re new to the world of smart appliances and is just looking to understand the basics of an evolving IoT industry that’s still in its infancy for the most part, you can easily opt for the cheaper alternative without really missing out on a lot. The Nest Thermostat E will still give you most of the intelligent features, look decent on your wall, and save you a few bucks on electricity every month. However, you won’t get the extra one-year warranty that you get with the original third-gen device, nor would it give you the bragging rights, so you’ll need to consider all of that before deciding to pull the trigger.

SEE ALSO: Cable vs Fiber Broadband: Which is Better?

Both the Nest Thermostat E and the Nest Learning Thermostat are great devices in their own rights, but are targeted at different segments of consumers for the most part. While the original device remains the one to go for, the new one isn’t really something to scoff at either. So are you planning to buy either of the devices, or do you already have one in your home? Do let us know in the comment section below because we love hearing from you.