Skip to content
Home Alternative MX Player for iPhone: 6 Alternative Video Players You Can Use

MX Player is quite simply one of the most widely used video players on Android. It comes with a plethora of great features, such as gesture based controls, support for a wide variety of video formats, and more. Unfortunately, MX Player is not available on iOS. While you will find a number of apps dubbed MX Player for iOS or MX Player for iPhone on the App Store, they are just faux apps trying to cash in on MX Player’s popularity.

So, if you want a similar experience on an iPhone, you’ll have to go with an alternative application instead. This poses a big problem, as most free video players for iPhone and iPad do not support AC3 encoded audio, due to the licensing fee, but most of the paid apps do, and that is just a decision you’ll have to take. That said, if you’re looking for apps like MX Player for iOS, here are 6 MX Player alternatives for iPhone that you can use:

nPlayer is probably the closest you can come to a complete alternative for MX Player on iOS. The app comes with support for almost every video format you’d like to play, just like MX Player on Android. It has a decently good enough UI, as well, and with support for MX Player like gesture controls, the app is definitely one of the best MX Player alternatives you can get on iPhone. You can swipe along the video to scrub through the video timeline; you can also swipe up/down on the left part of the video to adjust brightness, and on the right side to adjust the video playback volume. nPlayer also supports post processing, subtitles, as well as the ability to adjust the aspect ratio for playback.

With AirPlay support, you can easily stream your videos to your AppleTV. With nPlayer, you can even watch your videos in picture-in-picture mode, which can come in handy on devices with larger screens. Unfortunately, the PiP mode only works inside the app, but that is mostly because of the restrictions Apple places on apps. 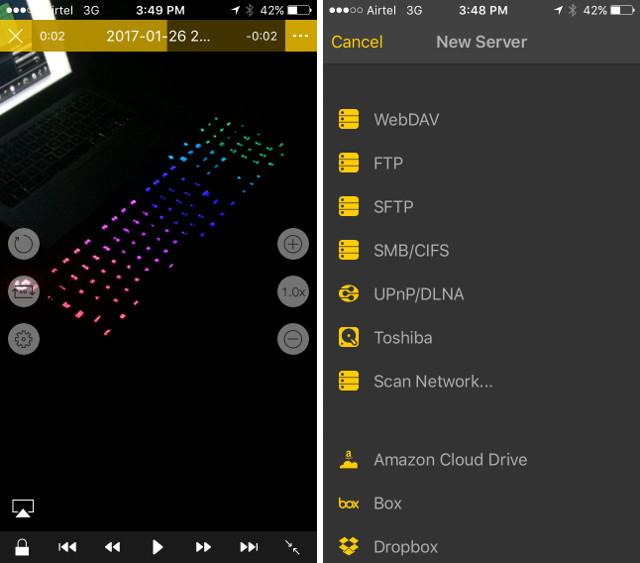 Apart from that, nPlayer can also stream videos over networks, and you can use services such as Dropbox, Google Drive, and more. You can also use nPlayer to view videos over WebDAV servers, FTP servers, SMB servers, and a lot more. nPlayer also comes with a web browser built right in, so you can easily search, and download videos from inside the app itself.

AVPlayer is another iPhone video player that you can use as an alternative to MX Player. Just like MX Player, AVPlayer has full support for almost every video format that I tested it with, plus, it supports Dolby Digital (AC3) sound, along with Dolby Digital Plus. The app offers post processing capabilities, and will let you control things like the contrast, and the saturation of the video.

Just like MX Player, the app comes with gesture based playback controls, however, they work differently on AVPlayer, which is something you might need to get used to, in order to appreciate it properly. You can swipe to the left/right to move the video 10 seconds back, or forward, respectively. You can also swipe up, to increase the playback speed to 1.5X the original. If you need to bring the speed back to normal, simply swipe down. The app supports up to 2X the original speed of the video, which is good enough, but not as much as nPlayer’s 4X speed support. 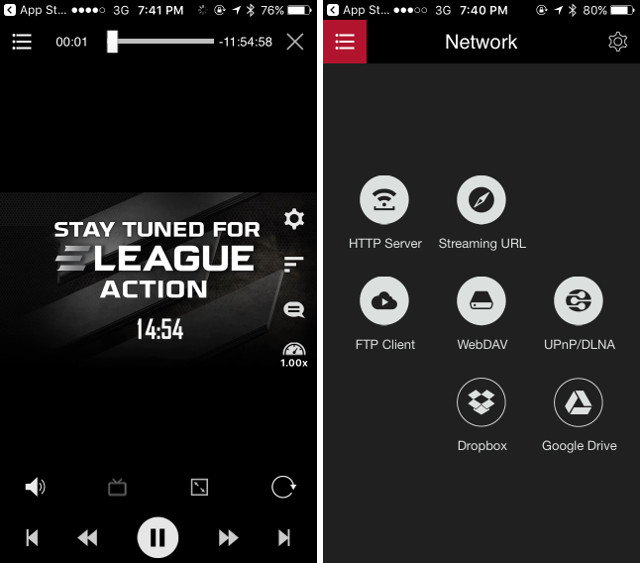 Additionally, AVPlayer also supports adjustable aspect ratios, resuming playback from where the user left off, and more. You can even directly open videos from emails, with the “Open In” feature. The app also comes with a decent folder management system, one where you can move, rename, and create folders, as well as lock the folders with a passcode. All in all, AVPlayer is definitely an app you can consider, especially if you don’t want to spend $8.99 on an app like nPlayer.

VLC is one of the most well known video players out there, be it on Android, or iOS. Just like MX Player, the VLC app comes with support for almost every video format. It can even play H.265 encoded videos flawlessly. VLC automatically organizes your videos, and music into separate libraries, which is something I definitely like. While playing videos, the app offers a plethora of useful features, such as the ability to increase, or decrease the audio delay, the subtitle delay, as well as the playback speed. VLC also supports post processing of the video, and you can adjust things like the brightness, contrast, hue, saturation, and gamma values of the video being played. 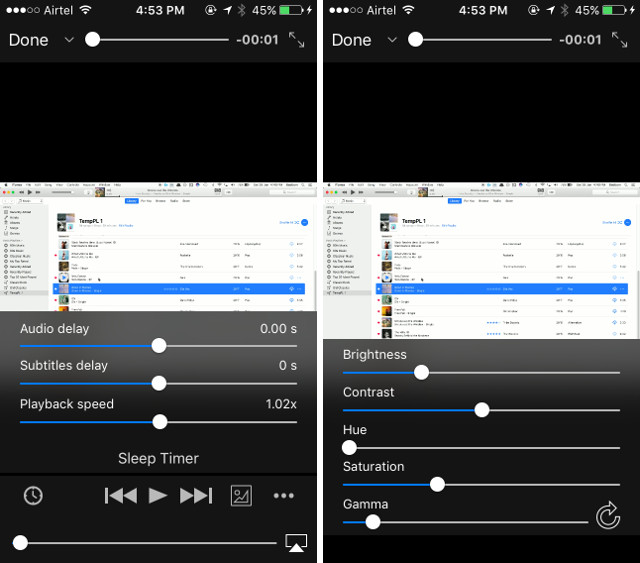 With VLC, you can even open network streams to play your videos from. You can stream videos from your local network, or from services such as an HTTP, RTMP, FTP, or UDP server, among many others. Cloud services such as Google Drive, Dropbox, etc., are also supported by the app. Another really handy feature offered by the app, is the ability to transfer files to your iPhone over WiFi. You can simply enable the “Sharing via WiFi” option, and share files between your computer, and your iPhone with ease.

With all those features, I would have probably put VLC on top of this list, however, the VLC app can’t playback AC3 encoded audio files, because of licensing issues, which is definitely a negative, especially when compared to nPlayer, and AVPlayer. However, this can be excused, because VLC is a free application, and it has absolutely no ads whatsoever.

Infuse is a great app that you can use for watching videos on your iPhone. Infuse can play almost every video format you throw at it. You can play all of the basic formats such as MP4, and MOV, but Infuse can also easily play formats such as MKV, MTS, FLV, and a lot more. Infuse also includes support for Dolby Digital audio (AC3/EAC3). The app fully supports MX Player like gesture controls for playback. So, you can slide left/right to scrub through the video, and you can adjust the volume, and brightness with simple swipe gestures, as well. 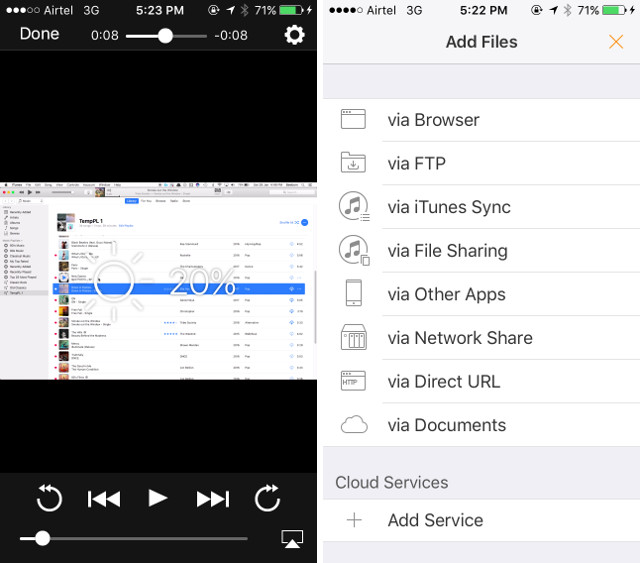 Infuse also supports streaming videos from a variety of network sources. It can integrate with cloud services such as Dropbox, Google Drive, and OneDrive. You can also easily use Infuse to stream videos from your Plex, or Kodi server, as well as NAS, and WiFi hard drives.

With the Pro upgrade, you can even use AirPlay with Infuse, and stream your videos to your Apple TV easily. However, what sets Infuse apart, is its support for Google Cast, so even if you use a Chromecast, instead of an Apple TV, you can easily stream your videos to your Chromecast, and watch them on your TV. Also, unlike most other free apps, Infuse does not include ads.

KMPlayer is another decent alternative for MX Player on iPhone. It supports a lot of different video formats, including the common ones like MP4, and AVI, as well as some really rarely used formats such as XESC, NSV, and more. With KMPlayer, you’ll even be able to play HEVC (H.265) encoded videos with ease, and even videos encoded with the VP9 codec. Just like MX Player, KMPlayer supports gesture based controls such as swiping to scrub through the video, and swiping up, or down, to adjust the volume, and brightness of the video. 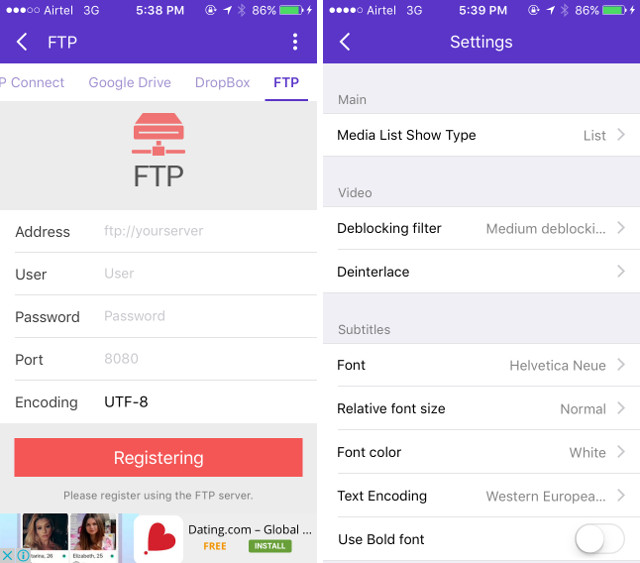 With KMPlayer, you can use network services such as Google Drive, and Dropbox to transfer files to your iPhone. You can also use an FTP server, if that is more to your preference. Being a free app, KMPlayer does not include support for Dolby Digital audio (AC3/EAC3). Moreover, the app displays full screen ads, every now and then, and once you dismiss these, they remain as banner ads on the bottom of the UI, which is just very distracting. Alas, with KMPlayer, that’s the price you pay for getting it for free.

Kodi is a very powerful media center application available for almost every platform you might need a media center on. Adding plugins to Kodi can increase its power exponentially, but it’s this complexity that makes Kodi come last on this list. Also, installing Kodi on a non-jailbroken iPhone is not very easy, but you can follow our guide to get it up, and running on your non-jailbroken iPhone, as well.

With Kodi, you can organize all of your media in a central library, share them over a network, and stream them from any device. However, as far as using Kodi as an alternative to MX Player goes, Kodi comes with a plethora of great features. You can easily add all of your movies, and videos to the Kodi Movie Library. Just like in MX Player, you can play almost any video on Kodi. The app doesn’t come with any gesture controls, but it does have a plethora of other power features that makes it worthwhile. 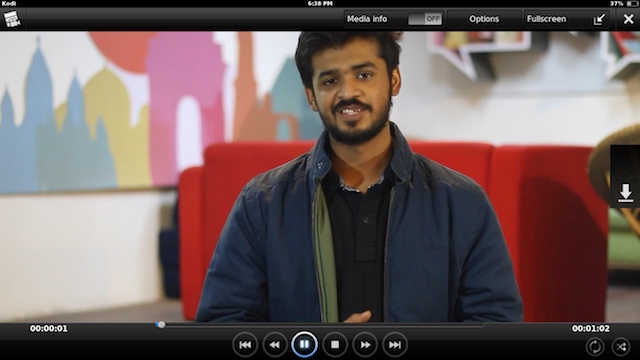 Playing videos in Kodi offers you a lot of great features, such as adjusting the zoom, pixel ratio, and even enabling post processing. You can even add bookmarks to a video, which is a feature I love. You can simply tap on the bookmarks button to add a bookmark, which will take you to that timestamp in the video. This can be used to easily mark points of interest in a video. While the current interface of Kodi might look a little outdated, the latest “Krypton” update will revamp things when it arrives.

SEE ALSO: 7 Best Video Editing Apps for iPhone You Can Use

Use These Apps as MX Player Alternatives on iPhone

To sum things up, if you have been looking for MX Player on iOS, these are some of the best video players you can use, which offer functionality similar to what MX Player does on Android devices. While not every video player on this list offers every feature that you may want, some apps, like nPlayer, and AVPlayer definitely offer every feature you may want from a video player. Things like support for multiple video formats, and the Dolby Digital codec (AC3/EAC3), along with gesture controls, the ability to stream videos over a network, among many more.

So, what video players do you use on your iPhone? Do they support all the formats you’d like them to? I’d like to know about your preferences when it comes to video players on iPhone; also, if you know of any other video player app that offers MX Player like functionality, do let me know about it in the comments section below.