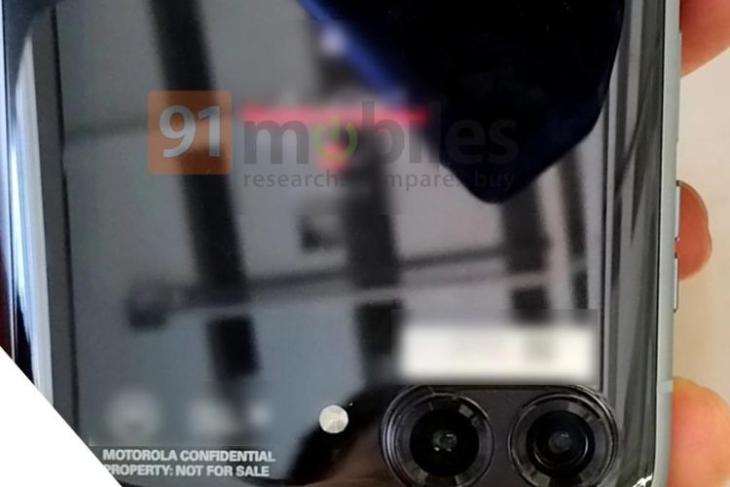 Motorola is planning to launch its third-gen foldable phone, the Razr and apart from hearing about it for the first time, we also have a look at its design. And this time we can expect a major design overhaul, which feels like a step to get ahead in the game currently dominated by Samsung. Here’s a look.

Popular leakster Evan Blass (via 91Mobiles) has shared some images of the next Motorola Razr, codenamed “Maven” and from the looks of it, it is just the Samsung Galaxy Z Flip 3. It appears the company will lose the classic Razr design and let go of the chin.

The smartphone is seen with dual rear camera housings similar to the Z Flip 3 and these could be configured at 50MP (the main camera with f/1.8 aperture) and 13MP (an ultra-wide/ macro camera). It is another area where Motorola might up its game to take on the competition, primarily from Samsung.

The 32MP selfie shooter is expected to be in a punch-hole, which means the old waterdrop notch will finally go away. There are chances that these few changes could lead to a much better foldable display for the upcoming Razr 3 instead of the one seen on its predecessors! Other changes include a boxier chassis and a repositioned fingerprint scanner, which will be embedded in the power button.

The Motorola Razr 3 could be available in either 8GB+256GB or 12GB+512GB RAM+Storage variant and might come in Quartz Black and Tranquil Blue colors. This is where a visual difference appears as the Samsung Flip phones are more colorful! Since the company is going the high-end route, we can expect more interesting specs such as faster charging, possible support for a high refresh rate, and loads more.

As for the availability, Blass expects Motorola to launch the next Motorola Razr in China first (most likely in late July or early August) and then globally. We can expect the Indian launch to happen later this month. That said, Motorola is yet to comment on this, so, it would be wise to take these with a grain of salt and wait for official information to arrive.

A Motorola Rollable Phone Too?

Meanwhile, Evan Blass has also suggested that Motorola is planning to launch a rollable phone, codenamed Felix. It is said that the phone will roll vertically as opposed to the opening sideways, which has been the case with the Oppo and LG rollable phone concepts.

Hence, it will open to become much taller than going for a wider display area. The phone is being tested on Android 12. While this sounds intriguing, Blass confirms that the rollable phone is still in its early development stage and it might at least a year for it to officially arrive. The details are, therefore, expected to change with time and it would be best for more information to appear.

So, what are your thoughts on Motorola’s upcoming foldable and rollable phones? Let us know in the comments below.