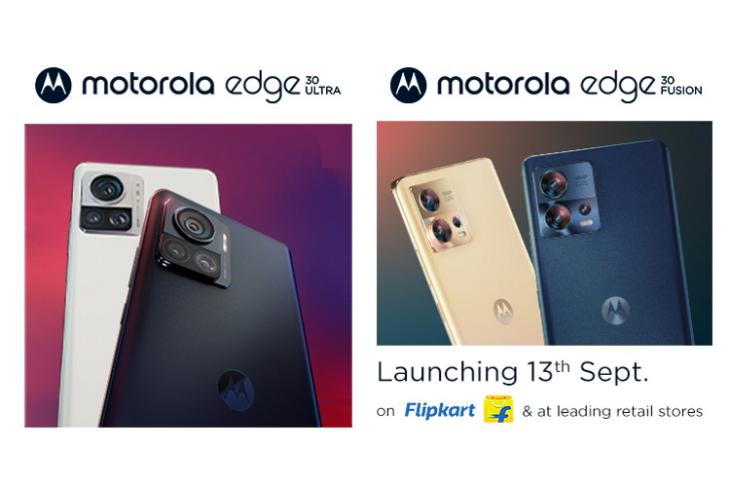 Motorola expanded its highly successful Edge lineup with the release of the Edge 30 Ultra, Edge 30 Fusion, and Edge 30 Neo in the global markets earlier this week. Now, in line with rumors, the company has confirmed that it will be launching two of these models in India next week. So let’s look at the details below.

In an official tweet earlier today, Motorola India confirmed that the Edge 30 Ultra will launch in India on September 13. Not just that, the Motorola Edge 30 Fusion will also tag along to give premium smartphones like Realme GT 2 and iQOO 9SE a run for their money. Check out the tweet attached below.

Both the Edge 30 Ultra and Edge 30 Fusion will be exclusive to Flipkart in India, and a dedicated microsite for the launch has already gone live on the e-commerce website. Now, we don’t need to speculate anything about these phones as they launched earlier this week and all its specifications are available online.

First, let’s quickly go through the specifications of the Edge 30 Ultra. Initially unveiled in China as the Moto X30 Pro, this is the world’s first phone to include a 200MP camera. And it will also be the first 200MP camera phone to launch in India. Apart from the 200MP triple camera system, you also get a 6.67-inch Full-HD+ pOLED display with a 144Hz refresh rate, Snapdragon 8+ Gen 1 SoC, up to 12GB RAM and up to 256GB storage, and 4,610mAh battery with 125W fast charging and 50W wireless charging support.

As for the Moto Edge 30 Fusion, you get a 6.65-inch Full-HD+ curved pOLED display with a 144Hz refresh rate here. This is coupled with the Snapdragon 888+ 5G chipset, along with up to 12GB RAM and up to 512GB storage, and 4,400mAh battery with 68W fast-charging. It also includes a 50MP triple camera setup with OIS support and a 32MP autofocus front camera, which is great.

Motorola is making some of the best smartphones in the market right now, especially with a stock Android experience, so I’m quite excited for this launch. Are you? Let us know in the comments below.