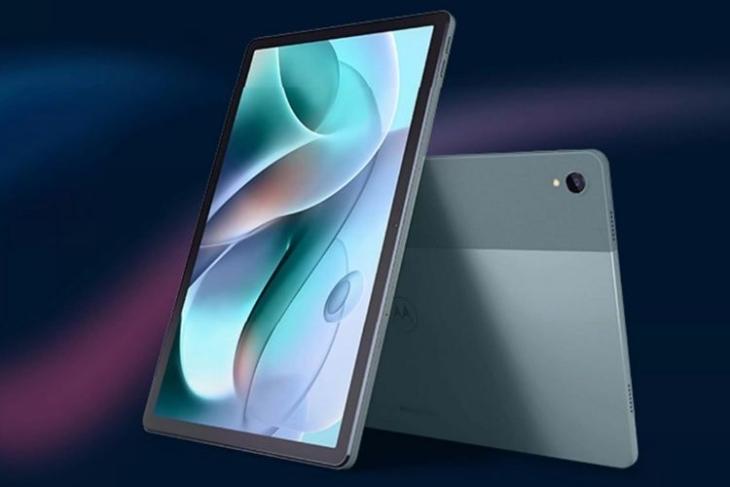 Motorola is going to launch a new tablet called the Moto Tab G70 in India soon. The tablet now has a dedicated micro page on Flipkart, giving us a close look at its entire specs sheet and hinting at an imminent launch. While the microsite doesn’t reveal the Tab G70 India launch date, here’s a look at all the possible specs and features we will get to see on this tablet.

The Moto Tab G70, which will join the recently launched Tab G20 in India, will come dual-tone design with a single rear camera and significant bezels. The tablet is seen with the volume buttons on the right side, a power button at the top edge, and the speaker grille and USB Type-C port at the bottom edge.

The tablet is confirmed to include an 11-inch IPS LCD 2K display with support for up to 400 nits of peak brightness. The panel is TUV Rheinland-certified as well. The Moto Tab G70 will be powered by an octa-core MediaTek Helio G90T SoC, coupled with 4GB of RAM and 64GB of storage. The storage can be further expanded via a memory card.

The device is confirmed to house a 13MP rear snapper with autofocus and LED flash, along with an 8MP front camera with fixed focus.

A 7,700mAh battery with 20W Rapid Charging support is also confirmed in the Flipkart listing. It will run near-stock Android 11, will get the Google Kids Space, and a dedicated Google Entertainment Space. Additionally, the tablet will be equipped with quad speakers with Dolby Atmos, dual mics, IP52 water resistance, Wi-Fi 802.11 a/b/g/n/ac, and Bluetooth version 5.1.

The Moto Tab G70 will come in a single Modernist Teal colorway. However, the pricing and availability details still remain unknown. As it could launch soon in India, we can expect Motorola to reveal these details in the coming days. Hence, stay tuned for more information.