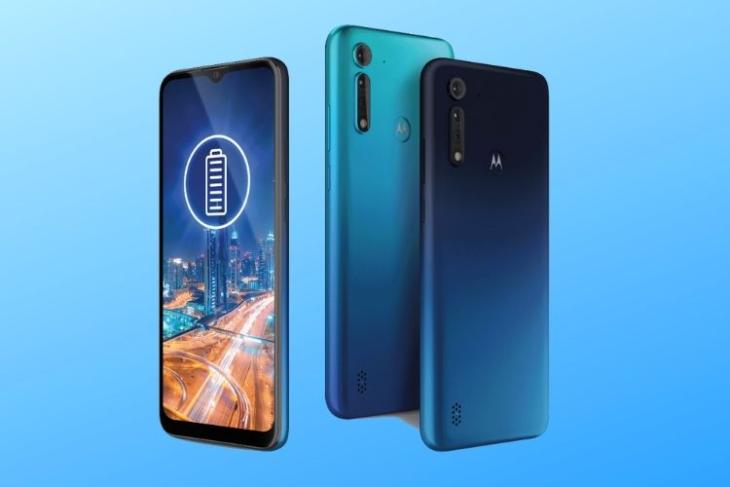 Only a couple days after shocking everyone with the exorbitant price of its Motorola Edge+ flagship in India, the company has debuted a new budget smartphone today. The Moto G8 Power Lite, which is equipped with a MediaTek chipset, triple-camera array, and a massive 5,000mAh battery, has made its debut in the sub-Rs. 10,000 segment.

The device boasts a polycarbonate body with a dual-tone blue color. The speaker sits on the rear and it’s the first time in years that I have seen such a speaker placement. The front of the Moto G8 Power Lite includes a 6.5-inch HD+ Max Vision display with a 20:9 aspect ratio and 1600 × 720 resolution. There’s a waterdrop notch up-top and it houses an 8MP selfie snapper.

It’s the MediaTek Helio P35 chipset, which is comparable to the Snapdragon 660, that runs the show under the hood. The chipset is coupled with 4GB of RAM and 64GB of built-in storage, which is expandable up to 256GB via a dedicated microSD card slot. Moto G8 Power Lite runs Android 10 with some customizations out-of-the-box.

In the optics department, Moto G8 Power Lite includes a triple rear camera system. It incorporates a 16MP primary camera, a 2MP macro camera, and a 2 MP depth sensor. So basically, you only have a single camera with almost zero versatility. It would have been better if the macro camera was swapped out for an ultra-wide camera.

There’s a 5,000mAh battery with 10W Rapid charging support onboard, which is okay at this price point.

Moto G8 Power Lite comes in a single 4GB+64GB variant and it has been priced at Rs. 8,999 in India. It will be available in two color variants, namely Arctic Blue and Royale Blue. The device will go on sale from 29th May, exclusively on Flipkart.