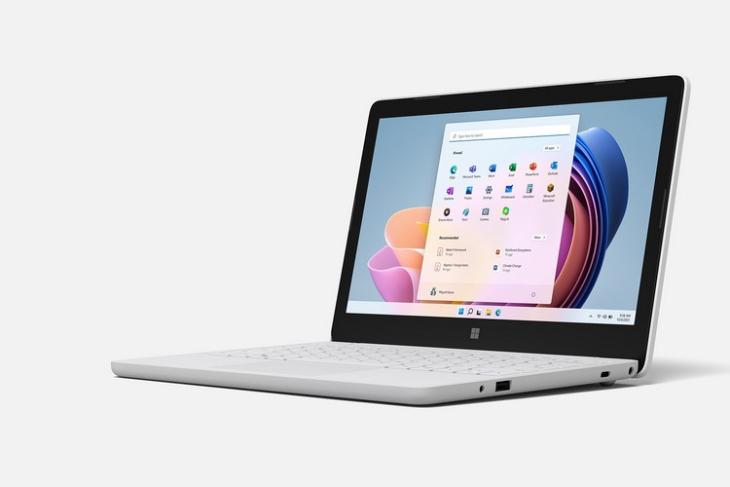 Dubbed the Surface Laptop SE, the device is perfect for students, aiming for in-class learning, hybrid learning, or at-home learning. The notebook comes pre-loaded with the Windows 11 SE, which was also announced during the event, and also comes with Microsoft 365 for Education. So, let’s take a quick look at the key specs and features of the device.

Starting with the design, the Surface Laptop SE comes in a student-friendly form factor and is designed such that easily carried around in a backpack or hand. It has an all-plastic body, a hinge that goes up to 135-degrees, and comes in a single Glacier color option. Its dimensions are 11.17” x 7.6” x 0.70″ and it weighs just over a kilogram.

The device features an 11.6-inch TFT LCD panel with a maximum resolution of 1366 x 768p and an aspect ratio of 16:9. At the top of the display, there is a 1MP front-facing webcam that can record 720p videos at 30FPS (Frames per second) which should suffice for quality video calls. There is also a single digital microphone onboard that can capture the voice of the students during an online class or a project-focused video conference.

Coming to the internals, the Surface Laptop SE can include the Intel Celeron N4020 processor or the Intel Celeron N4120 CPU. For graphical needs, the device comes with Intel’s UHD Graphics 600 that can easily run graphics-focused education apps like Minecraft Education Edition that comes pre-loaded with the laptop.

Moreover, the student-edition Surface Laptop SE can pack up to 8GB of RAM and up to 128GB of eMMC storage. The device also has a big battery that, as per Microsoft, can deliver up to 16 hours of battery life on a single charge. And for the I/O, Microsoft has included one USB-A port, 1x USB-C port, 1x DC connector, and a trusty 3.5mm audio jack.

Other than these, the Surface Laptop SE has Bluetooth 5.0 LE and Wi-Fi: 802.11ac support. For security, the device features a nano security lock slot and firmware TPM.

Microsoft has kept the education-focused Surface laptop pretty basic, both in terms of design as well as the specs. And one of the primary reasons for this is the attractive $249 price tag for the base model of the Surface Laptop SE. It comes with 4GB of RAM and 64GB internal storage, and the Intel Celeron N4020 CPU.

Who is the Surface Laptop SE For?

Now, if you are a student who is interested to get the new Surface Laptop SE, unfortunately, you cannot! The device is primarily targeted towards schools and education institutes that buy laptops in bulk to hand them out to their students. This explains the cheap price tag, the basic specs, and the plastic build of the device as it is meant to get the job done for students.

Moreover, students will not be able to install or uninstall apps and services on their laptops. These will be handled by the IT departments of the educational institutes and schools. So, the Surface Laptop SE is a great option for schools, which solely rely on hybrid learning due to the still-ongoing Coronavirus pandemic, as it caters to Kindergarten students to Grade-8 students.

Moreover, with Windows 11 SE and Microsoft 365 pre-loaded on the machine, students will be able to access files, projects, and other data on the laptop even if they do not have an internet connection at all times. The device will be able to automatically save files locally to provide offline access. When it gets an active internet network, the device will sync the changes using Microsoft’s cloud storage service OneDrive.

So, that is all about the new Surface Laptop SE that Microsoft unveiled for the education sector today. With this, the company is starting a new journey into the education sector, taking on Chrome OS, and we would love to see more such products in the future. Let us know your thoughts in the comments below.