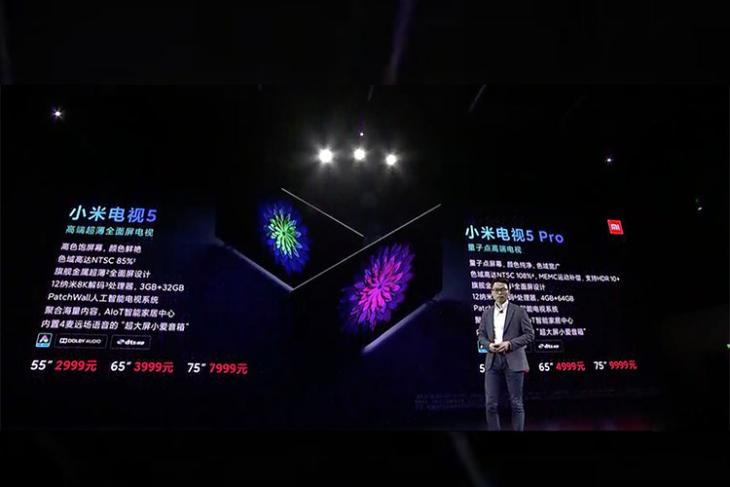 Xiaomi has today launched a brand new TV under its Mi TV lineup in China. The Mi TV 5 and Mi TV 5 Pro come with class-leading specifications and a bunch of impressive features to boot, for prices that are quintessentially Xiaomi.

The Mi TV 5 Pro is the high-end headliner of the Mi TV 5 series. The TV comes with 108% NTSC coverage, along with a QLED panel in three different sizes — 55-inch, 65-inch, and 75-inch. The Mi TV 5 Pro is also 8K ready, which means that even though it doesn’t have an 8K resolution, it can play 8K content on that gorgeous looking panel. Xiaomi has also made the TV thinner, and it’s now just 5.9mm and comes with ridiculously thin bezels all around.

The Mi TV 5 Pro comes with support for 8K decoding, as mentioned above, and also supports MEMC (which you should probably turn off by the way). There’s HDR10+ support as well, so you can enjoy HDR10 content on the new Mi TV 5 Pro.

Xiaomi has also built in far-field microphones in the TV so you can control your smart home devices with the company’s AI assistant. There are four far-field mics on the Mi TV 5 Pro, and users will be use voice commands to control IoT devices. This feature, however, is expected to be limited to China. However, I do hope that Xiaomi enables Google Assistant on its TVs when they are launched globally so we can use them as smart home hubs here in India as well.

As far as specs are concerned, the Mi TV 5 Pro comes with a 12nm processor clocked at 1.9GHz, paired with 4GB DDR4 RAM and 64GB eMMC storage. There’s Xiaomi’s Patchwall UI here as well, which has been a staple of Xiaomi’s TVs since the first Mi TV was launched.

The company hasn’t announced any plans for a global launch so far, but we’re hoping that Xiaomi launches these TVs in India soon so we can splurge on brand new, gigantic TVs for ourselves.