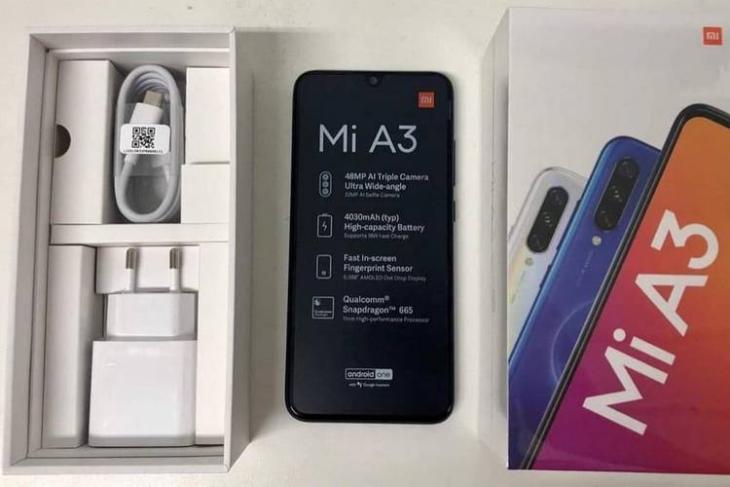 Xiaomi recently started teasing the launch of its next-gen Android One smartphone, the Mi A3. While the company is yet to officially announce any of the key tech specs of the upcoming device, a massive leaks has apparently revealed quite a few important pieces of information about the phone. Multiple live images of what’s said to be the Mi A3 and its retail packaging are also believed to have surfaced online, giving us our first look at the all-new phone.

As can be seen from the images, the Mi A3 is expected to feature a triple-camera setup at the back and a teardrop notch up front, both of which are along expected lines. What wasn’t expected, however, is the info printed on the phone display cover that suggests it will be powered by the Snapdragon 665 SoC, and not the more powerful Snapdragon 730, as claimed by earlier reports.

The rest of the specs include a 6.08-inch AMOLED screen, an under-display fingerprint scanner and a 4,030 mAh battery with 18W fast charging. The rear-camera setup will apparently be led by a 48MP primary sensor, while a 32MP camera will help shoot selfies up front.

Xiaomi last week confirmed that the Mi A3 will be unveiled July 25 in Poland, but didn’t reveal any of the key tech specs of the phone. While Xiaomi didn’t say as much, the Mi A3 Lite is also expected to be announced alongside. Online speculations originally suggested that they might be re-branded versions of the CC9 and CC9e smartphones the company launched in China earlier this month, but the latest leaks now suggest otherwise, which is certainly disappointing.