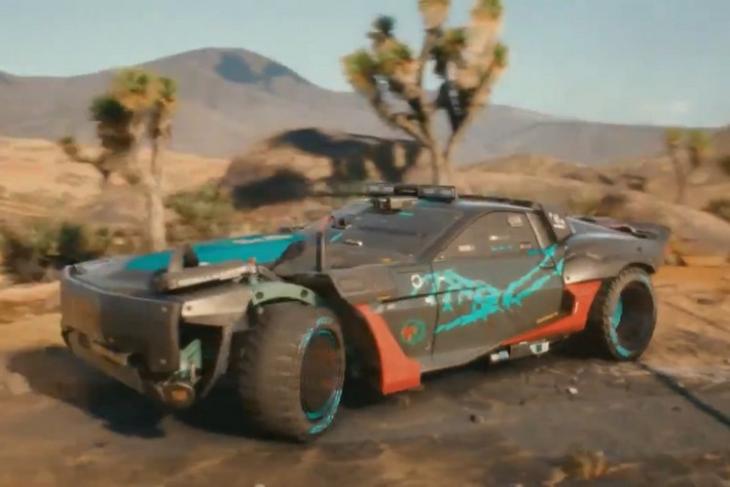 The 15th of May 2020 marked the fifth anniversary of the popular film, Mad Max: Fury Road. The Academy Award-winning film starred by Tom Hardy and Charlize Theron carried a post-apocalyptic theme, much like the upcoming hyped game, Cyberpunk 2077. So, to pay a tribute to the film, developers, CD Projekt, created a custom Mad Max-themed car for the game.

CD Projekt shared a tweet (below) on May 15 showcasing the themed “Reaver” car with a custom design all over its body and wheels. The tweet contains a 360-degree 4-seconds video, capturing the car from all angles.

„Reaver” – custom-built Wraith gang vehicle based on Quadra Type-66 car. With its near 1000 horsepower, you will ride eternal, shiny and chrome.
Happy 5th Anniversary #MadMaxFuryRoad pic.twitter.com/9E0gqJKqV5

Now, if you are someone who likes a beast-looking design for cars, then you’re gonna love this design as it looks pretty bad-ass. The “custom-built Wraith gang vehicle” is based on the design of the Quadra Type-66 car, which exists in the game. The Wraith gang, on the other hand, is a group of nomadic individuals in Cyberpunk 2077, who live in the Badlands.

The Quadra Type-66 car, made by Quadra (a fictional car manufacturer in the game), is a popular car among Cyberpunk fans. It is based on the 1970 AMC Javelin that trod the American roads back in the ’70s.

Now, after watching the video, fans have been quick to notice the “desert-area” in the backdrop. So they asked lead quest designer, Paweł Sasko that if players can go in there or not. The designer wrote, “It’s called Badlands and you will explore it in such vehicles”.

It's called Badlands and you will explore it in such vehicles 😉

Personally speaking, the Mad Max-themed car looks pretty sick, to be honest. And I cannot wait to ride this for some off-road action in Cyberpunk 2077 when it comes out on September 17.