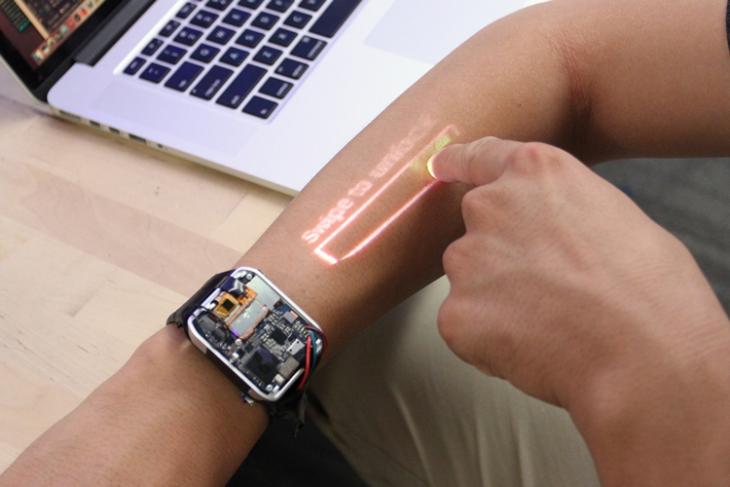 One of the major problems with smartwatches is the lack of screen real-estate, which is one of the reasons that’s believed to be holding back these devices from becoming more mainstream. However, if researchers at Carnegie Mellon University have their way, that may not be a major problem for smartwatch users for too long.

In a paper titled ‘LumiWatch: On-Arm Projected Graphics and Touch Input’, Robert Xiao, Teng Cao, Ning Guo, Jun Zhuo, Yang Zhang and Chris Harrison have detailed a device called LumiWatch that not only projects information onto the arm, but also lets the user interact with the projections. The projections can apparently be up to 40 centimeters in size, which is around 5 times larger than a typical smartwatch display.

The first prototype of the LumiWatch is said to come with a 15 lumen scanned-laser projector that uses red, blue and green lasers, and the projection is said to be bright enough for outdoor usage. Other hardware includes the Qualcomm APQ8026 SoC with a 1.2GHz CPU, 768MB of RAM, 4GB of flash storage and a 740mAh lithium-ion battery. The device, which runs on Android 5.1 Lollipop, is also said to feature Bluetooth and Wi-Fi connectivity.

It’s worth noting here that the LumiWatch is still only a prototype, and is a long way away from hitting prime-time. According to the researchers, the device would cost around the $600 mark if it was brought to the market at this stage, and while that isn’t terrible per se, it still is a bit of a work in progress in terms of its look-and-feel, so don’t expect it to hit the retail shelves any time soon.