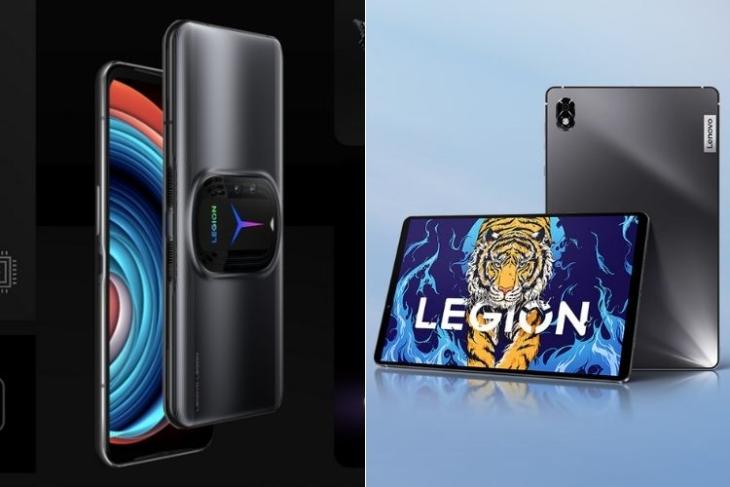 After launching the Legion Phone Duel 2 with a unique RGB-fitted back design, much like its original Legion Phone Duel from 2020, last year, Lenovo has now launched its latest gaming smartphone, the Lenovo Legion Y90, in China today. Alongside the gaming smartphone, the company has also launched a new Legion-branded tablet in the form of the Legion Y700, backed by the Snapdragon 870 SoC. So, let’s take a closer look at Lenovo’s new gaming devices.

Starting with the Lenovo Legion Y90, the gaming-focused phone boasts a similar design as the Legion Phone Duel 2 and all the features that a gamer would love. The device sports a huge 6.92-inch Samsung E4 AMOLED display with support for a 144Hz refresh rate and a 720Hz touch sampling rate. The display has a touch response of just 3.4ms.

The panel supports HDR10+, is deltaE < 0.6-certified, and has a peak brightness of 1,300 nits. It does not have any notch or a punch-hole cutout for the selfie shooter. Instead, the front cam is embedded underneath the slim bezels around the display to keep it out of the viewing area.

Now, as the phone is designed to be held horizontally, there is the RGB-backed glass module with the Legion logo in the middle of the back panel that can cycle through over 260,000 colors. It houses a dual-camera setup, including a 64MP primary lens and a 13MP ultra-wide lens with a 120-degree FOV.

Under the hood, the Legion Y90 packs the Snapdragon 8 Gen 1 SoC to deliver high-end gaming performance. The storage situation is where Lenovo wants to take lead over its competitors. The Y90 comes with a base RAM option of 12GB and goes up to a whopping 18GB of RAM.

Now, with the lower-end 12GB and 16GB models, you get 256GB of UFS storage. However, with the 18GB model, you will get 640GB of internal storage, split between 512GB of UFS storage and 128GB of SSD storage in RAID 0 configuration. There is also a massive 5,600mAh battery inside with support for 68W fast charging that can fully charge the device in 35 minutes, as per the company.

The Legion Y90 also comes with customizable shoulder keys on the side and two pressure-sensitive zones. Plus, it comes with two USB-C ports, a USB 2.0 port at the bottom, and another USB 3.1 Gen 2 port on the side to connect accessories while holding the phone horizontally.

Other connectivity features include support for 5G networks and Wi-Fi 6 technologies. Furthermore, it packs dual Z-axis linear motors and stereo speakers with Dolby Atmos support for an immersive gaming experience. The device runs Android 12-based ZUI 13 out of the box.

Coming to the Legion Y700, the device comes with an 8.8-inch AMOLED display with a resolution of 2,560 x 1,600 pixels and supports a 120Hz refresh rate and a 240Hz touch sampling rate. The panel supports 100% DCI-P3 color gamut and HDR10+ to produce accurate colors and visuals. It has a peak brightness of 500 nits and supports Dolby Vision.

Under the hood, the Legion Y700 comes with a Snapdragon 870 SoC, paired with up to 12GB of LPDDR5 RAM and up to 256GB of UFS 3.1 storage. There is also a huge 6,550mAh battery with support for 45W fast charging. The battery can fully charge in just 45 minutes and deliver 6 hours of gameplay on a single charge.

Other than these, the Legion Y700 tablet comes with a 3.5mm audio jack, which is surprisingly missing on the Legion Y90 gaming phone. Other features of the device include support for Wi-Fi 6 and Bluetooth 5.1 technologies for fast wireless connectivity and a pair of JBL speakers with support for Dolby Atmos.

Now, coming to the price of the Lenovo Legion Y90 and the Legion Y700, you can check them out right below.

As for the availability of the devices, Lenovo has already put the devices up for pre-orders in China along with some introductory discounts. Open sales will start from March 10 in the Chinese market. There is no word on whether the company plans to launch the devices in the global market or not. So stay tuned for further updates, and let us know your thoughts on these new Legion devices in the comments below.