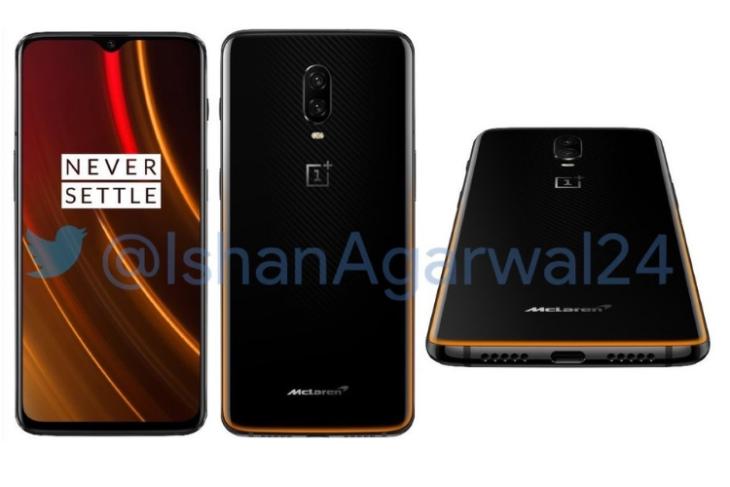 Just moments after OnePlus teased the arrival of Warp charge with OnePlus 6T McLaren Edition next week, leaked press renders of the smartphone have found their way online. The renders give us a sneak peek at the device, confirming the carbon fiber back panel, Warp charge technology, and 10GB RAM on board.

The press renders for OnePlus 6T McLaren Edition have been leaked, courtesy of up and coming tipster Ishan Agarwal, who posted the same on his personal Twitter handle. The key marketing material, as seen below, reveals that the device is going to look exactly like your regular OnePlus 6T on the front. You will have a waterdrop notch, tiny chin, and the under-display fingerprint sensor on board here. 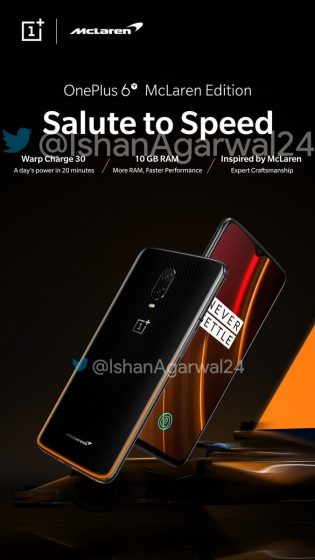 However, if you had been expecting major updates on the rear panel, then you may be in for a disappointment.

You can clearly see that our prediction about OnePlus adopting a carbon fiber design, similar to the OnePlus 6 Marvel Avengers Edition from earlier this year, for the back panel has been true. OnePlus 6T McLaren Edition will include a glass back with that kevlar-style back design, with an orange hue running along the edges and the McLaren logo at the bottom.

This is a minor aesthetic change but I believe it’ll look much better than an orange-black gradient, which we had been anticipating since the first day of the announcement. For a closer look at the front and rear panel of OnePlus 6T McLaren Edition, you can check out the press renders attached below:

As for the specs, the OnePlus 6T McLaren Edition will come equipped with a 6.4-inch Full-HD+ Optic AMOLED display and will be powered by the Snapdragon 845, paired with up to 10GB of RAM and 256GB of storage. The highlight, this time around, will be Warp Charge that will juice up your device for “all-day use” in just 20 minutes.