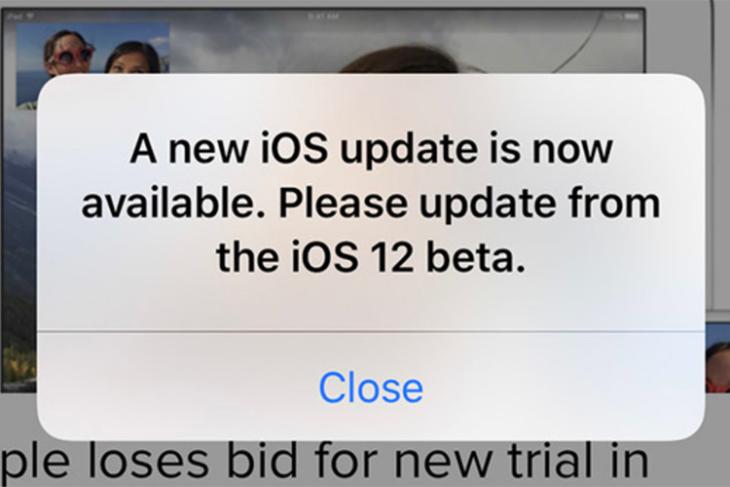 Apple’s latest iteration of its mobile operating system, iOS 12 is slowly but surely heading towards a stable release. It has been, up until now, one of the most stable iOS betas, with people more or less being happy with the state of the software.

However, the latest version of the iOS 12 beta has been hit with a weird and highly annoying bug where users are constantly being bugged (pardon the pun) by the OS to update their software, even when no software update is actually available.

The issue was first brought to light on Twitter after a number of iOS 12 testers posted about the annoying pop-up, and has received even more attention with more users getting affected by it over time.

The pop up usually appears when the iPhone is unlocked from sleep, although in some cases people are reporting that the pop up is being shown on invoking Control Center, or even in random intervals of time, although those reports haven’t been confirmed yet.

According to iOS developer Guilherme Rambo, the bug is caused by a date/time calculation error in the software.

It looks like this method in Springboard does some date/time calculations to determine if the current build is about to expire, every time the cover sheet gets dismissed. For some reason, the latest builds of iOS 12 think they're about to expire. (@davedelong :P) pic.twitter.com/HWe7C0NnIT

So far, Apple has not commented on the bug. However, it’s safe to assume the company will push out an update to fix this as soon as possible. iOS 12 was announced back in June during Apple’s developer conference WWDC, and is expected to be made available to everyone post Apple’s September 12 event where we’ll also see the new iPhones and Apple Watch.