Though the Voice Memo app may not have gotten much attention like the Photos app and Safari in iOS 14, it has received a notable feature called “Enhance Recording”. As the name itself suggests, it lets you improve Voice Memo recordings in iOS 14 on your iPhone and iPad. So, how does it work and why should you use it more often to fine-tune your recordings? Let me take you through the quick guide.

First and foremost, the new “Enhance Recording” feature takes advantage of machine learning to remove unwanted sounds from the recording. That means you no longer need to spend much time to get rid of unwanted things like echoing or background noise.

As to how it works, Apple has made it quite straightforward allowing you to improve the quality of the recordings with ease. Being hidden under the recording, it has remained by and large unexplored so far. Now that you know where it exists, let’s give it a try!

2. Now, tap on an existing recording or record a new one.

3. Now, tap on the three dots at the bottom left and choose Edit Recording in the Actions menu. 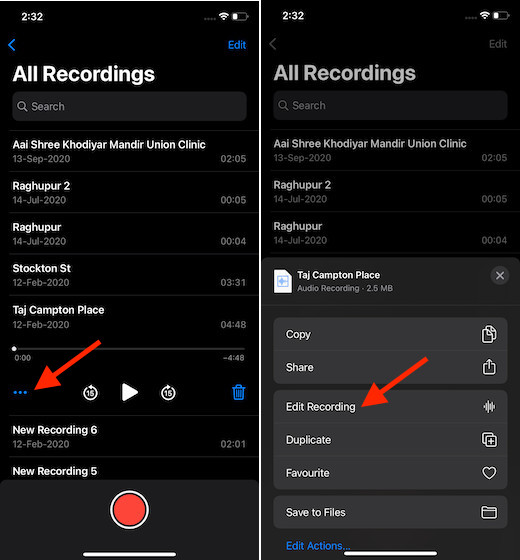 That’s pretty much it! The change will take place immediately. You can tap on the play button to check the improvement.

2. Now, tap on the three dots (ellipsis button) at the bottom left and choose Edit Recording in the Actions menu.

3. Next, tap on the magic wand icon located at the top left corner of the screen to deselect it. After that, make sure to tap on Done to confirm the change.

That’s done! You have successfully gotten rid of the audio enhancements. Now, the audio will sound original.

So, that’s the way you can improve the sound quality of your Voice Memo recordings. Whether you often record audio for your videos or just for the sake of memory, you may appreciate this all-new feature.

What’s your take on it? Do share your thoughts about it. Besides, make sure to check out our latest iOS 14 related topics including 10 creative home screen design ideas, best third-party widgets, and use custom icons on iPhone and iPad.